Near the town of Abu Sir el Malek, some 80 km south of Cairo on the way to the Fayyum Oasis, there's a hill containing tombs from Greco-Roman times.

In early 20th century excavations, archaeologists also discovered a necropolis dating back to prehistoric times and the tomb of a seven-year old child from the time of the 25th dynasty, around 650 BCE. 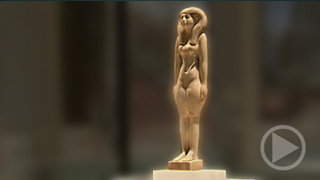 How does the tiny, delicate ivory figure of a seven-year-old child show us that Egyptian art could renew itself even after two and a half thousand years? And how was it influenced by African art from Kush, North Sudan?
▶ The Berlin Egyptian Museum▶Abu Sir el Malek
01:44
This website uses cookies - for more information about this and your rights as a user, please see our privacy policy. Click on "I agree" to accept cookies and to be able to visit our website directly".