Beauty and Refinement – Behind the walls of the Alhambra

Simple, yet complex. First a circle, then a square. The square rotates, thereby creating a sino, a star. As the lines are extended, new stars are formed, creating a never-ending interlacing pattern. The gaze starts to wander. The variety of the patterns is astonishing – the imagination knows no bounds. And everything is based on two simple geometric shapes: the circle and the square.

"We mustn’t forget that The Nasrid civilisation, the culture, the empire of the Nasrids is part of Islamic culture, an Islam that is Hispanic-Muslim in character. You could call it a southern European Islam, one however that exhibits a tradition and cultural values that were codified over the course of the centuries. It’s not true to say that there is an explicit ban on human representation; but there is however a tradition of avoiding such portrayals."

The Alhambra is saturated with cogitations on the divine. There is no division between sacred and secular life at the court. Even the earthly power of the Sultan is subordinate to that of God: "God alone is the victor" – the motto of the Nasrids is omnipresent on the walls of the Alhambra.

In the Koran, God is praised as the creator, sustainer and ordainer. A creation with three different dimensions: the universe, nature and man. The decorative features of the Alhambra unite these elements: the geometry represents the order of the universe, plants are a reference to the natural world, and the word to humans.

The craftsmen and architects of the Alhambra were on a quest for beauty and its proportions. As far back as the Middle Ages, mathematicians in all countries attempted to fathom the puzzling system of shapes and proportions. But the complex mathematical constructions still have the power to mystify to this day.

With the stalactite vault, or muqarna in Arabic, Nasrid art attained the peak of perfection. The designs that started out as two-dimensional patterns on tiles are continued into the third dimension. Again, the starting point is quite simple: you take a prism and remove the lowest end. This basic shape is duplicated – prefabricated prisms are affixed with plaster. More than 5,000 individual stalactites have been counted in a single vault. The masterpiece rises upwards into the air on a supporting structure made out of wooden slats. The overall effect is quite overwhelming, the ceiling appears to float in mid-air.

Above the square-shaped floor plan there’s an octagonal tambour with double windows. On top of that, the cupola with its traditional lantern. The stalactite vault in the Hall of the Two Sisters: the cube as a symbol of the earth – the cupola as a symbol of heaven.

"There is the splendid cupola, without equal, You will see her beauty, at once concealed and visible.Orion puts out his hand to greet her, and the full moon comes up close to talk to her."

On the firmament are the sun, "shams" in Arabic, and "qamar", the moon. The blinds in the upper section of the wall were called shamsiya or qamriya – according to the intensity of the light that they let into the rooms. They are made of wood or plaster, and the gaps were once filled with coloured glass. The decoration is again based on the geometric shapes, mostly stars. The light intensifies the effect of the hovering roof. The changing light conditions set the muqarnas in motion.

Decorative and functional at the same time: the taqas, or niches set into the walls. They used to contain tankards with fresh water, which were handed to guests to quench their thirst or for washing hands. 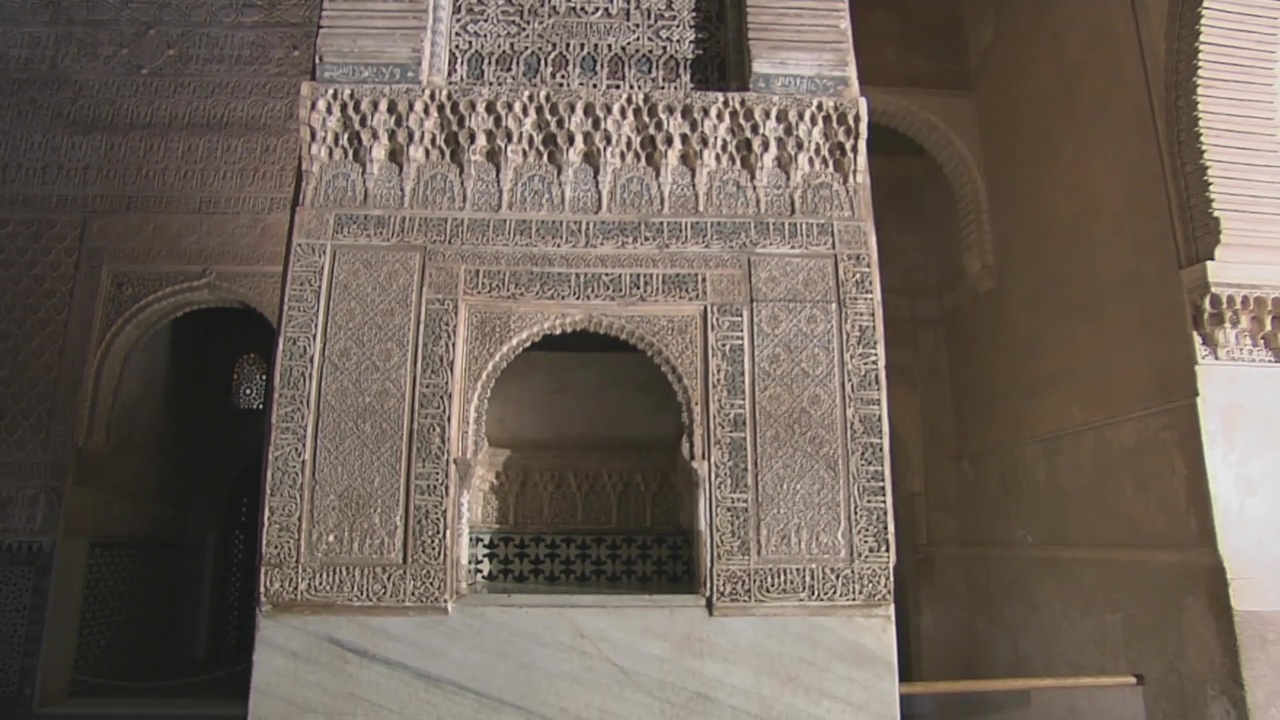 "I resemble a wedding throne, even surpassing it, I bestow good fortune on the bridal couple.Anyone who comes to me complaining of thirst, my spring gives him fresh water, clear and pure.I’m like the rainbow, when it appears in the sun of our master Abu l-Hayyay."

This is how the taqa on the left describes itself – in another poem by court poet Ibn al-Jatib.

"The Alhambra is actually constructed out of texts. All the walls – from the bases right up to the arches and the windows – are inscribed with words. In such a way that if we removed all structural elements, we would be left with nothing but an architecture made up of words. The poems are often written in the first person, a female person. The poetry elevates the building to something unattainable and the architecture itself to something incomparable."

The verses on the walls are written in two different fonts: The "Kufic script" owes its name to the city of Kufa, regarded as the cradle of Islamic culture. The first Koran texts were written in this script. It is steep, with many straight lines that create a rhythm – making it a particularly fitting geometric element. The "Naskh script" on the other hand, is an "italic" or manuscript and is still used today for literature and correspondence.

The Comares façade unites all types of decorative motifs: the tiles, the inscriptions – in praise of the sultan – and finally the muqarna. The crowning feature is the magnificent eves. The architecture of the Nasrid palaces is an interplay of surfaces and volumes – the interchange of courtyard and building, of closed and open rooms, of adorned and bare walls is by no means accidental. The outer walls of the Comares Palace and the Court of the Lions form a square. Both surface areas are connected with each other in relation to the square root – as is so often the case at the Alhambra. Is this pure coincidence? 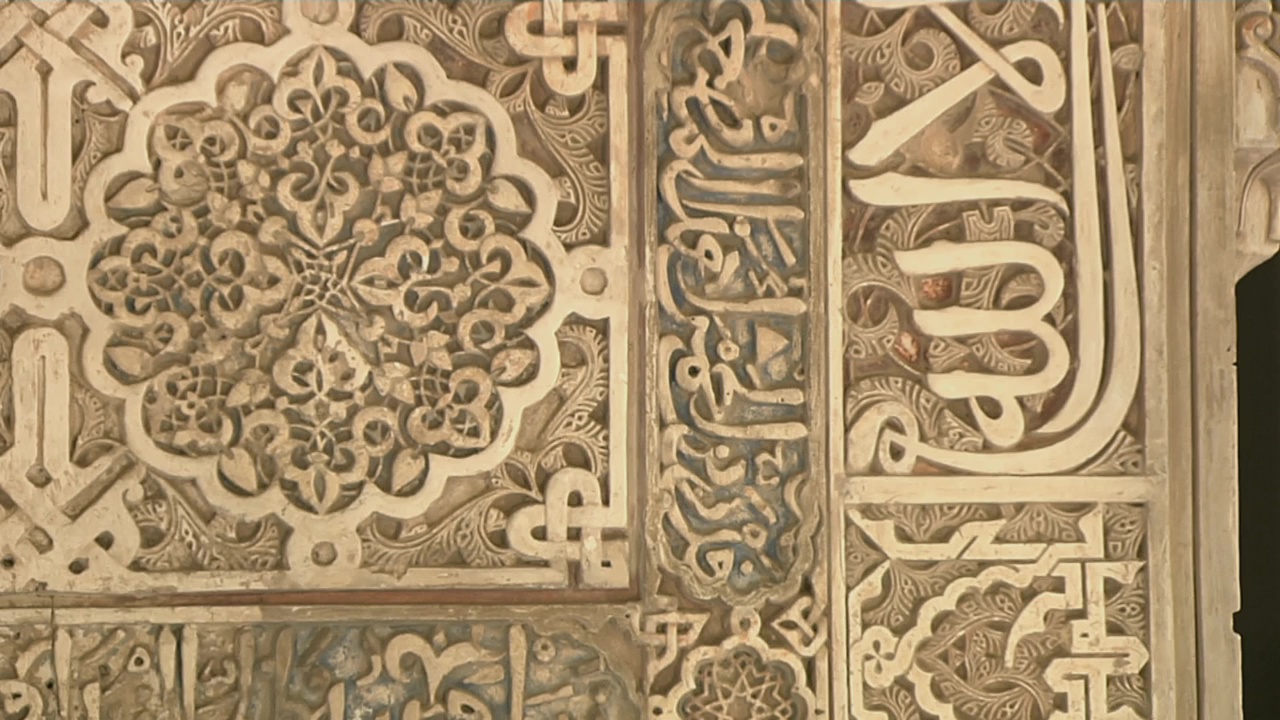 Chambers are always positioned at right angles to the inner courtyard. When adding the cube-shaped qubba three external walls were left standing free – a safeguard against much-feared fire.

"The origins of the Hispanic-Muslim house lie to a certain extent in the tradition of the Mediterranean-style, open building, constructed around a central courtyard, with water and plant elements and the ‘impluvium romanum’. The muslims appreciated this ability to attune to one’s environment, as they gave up their nomadic existence and became settled."

The origins of the Nasrids could be traced to North Africa. As nomadic tribes they moved from place to place, in the perpetual search for a better settlement location. The nomadic tent, the chaima, served several functions for its inhabitants – a tradition reflected in the architecture of the Nasrids.