The Medina - The City Within the Palace

The Nasrid empire was not just threatened by internal wrangling. Enemies from beyond the fortress walls, Castile and Aragon, advanced on Nasrid territory in the 15th century. More and more Muslims were forced to seek refuge in Granada. This was to have a positive impact: The huge stream of craftsmen and skilled workers contributed to the town’s economic upturn. The Puerta del Vino, or “Wine Gate” was once the main entrance to the Medina. Today, only the foundations of the town within the Alhambra remain. The idea of using cypress trees to recreate an impression of the lost facades emerged in the 1930s.

Residential buildings, shops, a mosque and a hamman – a network of houses and alleyways similar to those in North African cities. Much of it was discovered later during archeological excavations: the fortress city not only contained the houses of the medina, but also the palaces of the Abencerrajes and Yusuf III. Both the houses and the palaces follow the same constructional design: the entrance area is open, but the private quarters cannot be seen from the outside. All rooms open out onto the interior courtyard, which has a water basin at its centre.

The workshops of the Medina manufactured products exclusively for the court. The artistic creations of the pottery workshops were famous far beyond the borders of Andalusia. The Gazelle Vase is regarded as a masterpiece. Treasures such as this were also popular gifts for other royal households. But the master craftsmen of the Medina also produced everyday objects: jugs, oil lamps – even toy figurines made out of clay. This basin was used to mix loam, clay and other raw materials. The necessary water was supplied by the Acequia Real, the “royal canal”, which was channelled into the house. The kiln was directly alongside it. 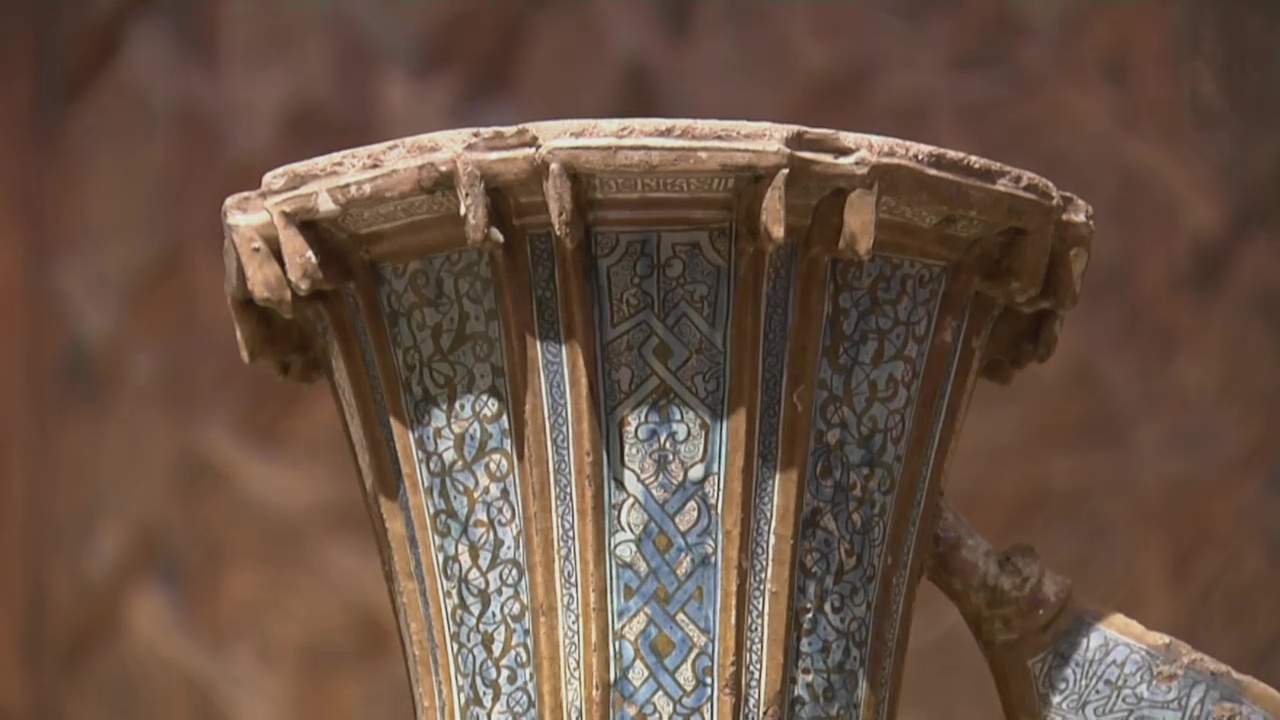 During the period of Nasrid rule, Granada also became one of the most important centres for silk production.

"There was an extremely intensive trade with southern Italy, with Venice and Genoa, with Siciliy, but also with Tunisia and with the ports of Egypt. That means that Trade relations were consolidated on both sides and that each side profited from the other in terms of the imported goods."

Masons were especially in demand at the court. Battlement walkways, towers and palaces – on the many building sites of the Alhambra there was always a need for skilled workers. The defence structures were essential for the survival of the Alhambra – after all, the threat posed by the Reconquista was omnipresent. Refined defence techniques were deployed against the Christian enemies, such as entrances leading to angled passageways, for example. Anyone trying to enter the compound through here could easily find himself trapped.

Defences were further bolstered by a talismans: The hand was intended to deter evil spirits – as well as human enemies. But towards the end of the 15th century, the Nasrids’ defences could no longer hold out against the all-powerful Christians. The last bastion of Islam was doomed.