Pleasure, Love, And a Taste of Paradise: The Gardens and the Generalife

“When choosing a spot for the construction of a house in the middle of gardens, one should select a raised point that facilitates protection and surveillance. The building should be facing towards midday, at the entrance to the estate; the fountain and water tank should bedug out at the highest point, preferably so that a canal flows along the shady side of the fountain. Alongside the basin one should plant borders, which should always be kept green, to delight the gaze. There must be flowerbeds and evergreen trees a short distance away.”

These horticultural guidelines were written by Ibn Luyun in the 13th century. Beyond a gully, on the slopes of the Cerro del Sol, is the site where the Generalife was built at the end of the same century – country house and summer residence of the sultans. The poet Ibn al-Yayyab called it the “House of Happiness” – a place for relaxation and rejuvenation. The architects appear to have adhered quite literally to the instructions issued by Ibn Luyun.

The project included the cultivation of types of fruits and vegetables that were previously unknown in the region: spinach, artichokes, melons, peaches, lemons, almonds – and above all pomegranate trees. Terraces were created to extend the size of the cultivated area. Their walls have withstood the elements over centuries.

“The Generalife is the only country estate in al-Andalus that has been maintained to this day with elements that we can still recognise. When we look across to the Generalife, the contemporary landscape looks pretty much exactly as it did back then.” 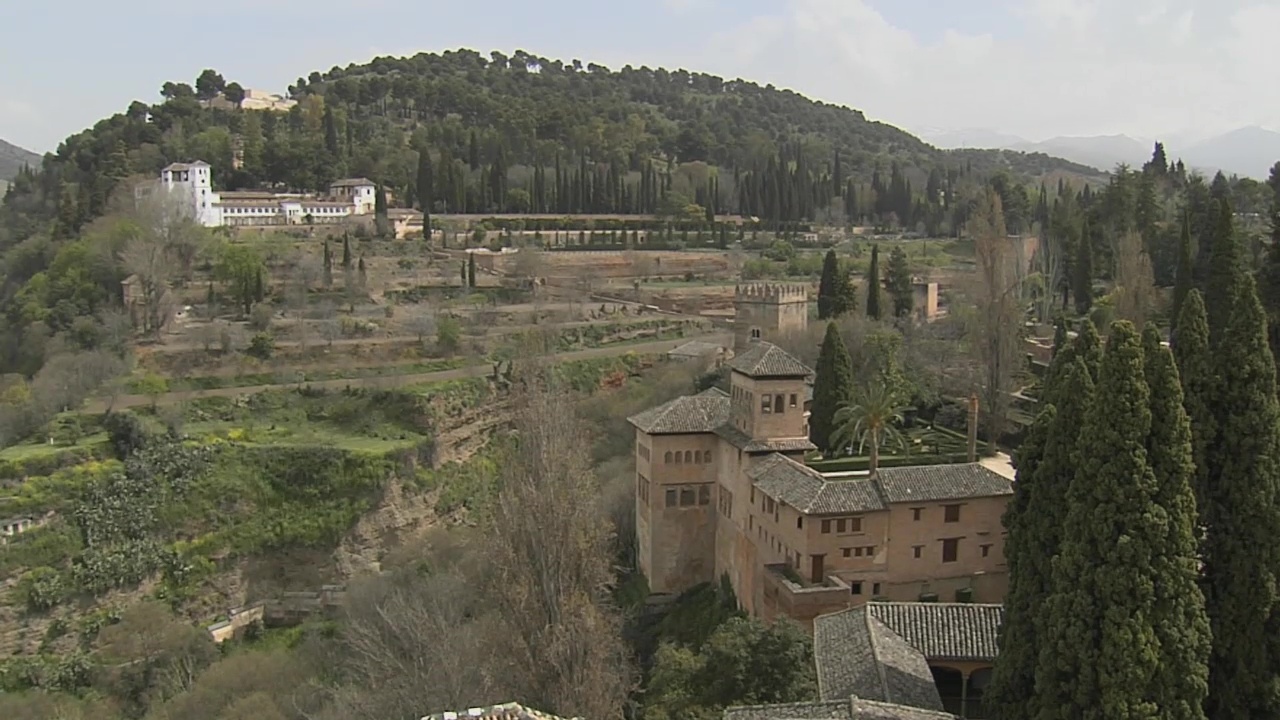 But the Generalife wasn’t just a country estate, it was also a summer palace. Just as at the Alhambra, the gardens play an important role. The aesthetic approach of the Nasrids knows no clear distinction between architecture and nature, between house and garden. The synthesis of both elements is the prerequisite for harmony.

At the same time, the gardens also served a social function. This is evident from the pictures in the Hall of the Kings: Muslim and Christian knights vy for the affections of a fair virgin. People can be seen chatting at the fountainside, and playing chess. Or presenting gifts to the ladies.

“The garden is a place for pleasure, but also a place to meet and fall in love. In contrast to the private residential areas, the garden allowed for this kind of encounter. A number of very nice anecdotes on the subject have been passed down to us through history: There are two figures, a young man and a young woman. An old woman serves as a matchmaker, someone who arranges meetings. And this lady advises the boy that if he wants to see this girl, he should simply hold a party in his garden. And she adds that everyone knows just how much the kings enjoy celebrating pleasurable parties in their gardens.“

A very different atmosphere reigns in the Myrtle Courtyard. It is an expression of power. This was a place where ambassadors and their retinues could parade, or where subjects could convey their concerns to the Sultan.

“When we look at the Myrtle Courtyard, as it is today, a double surprise awaits us. On the one hand we have gardens that are astonishingly true to their original form. The Myrtle Courtyard looks virtually the same as it would have done when the Catholic Kings first set eyes on it. On the other hand, it looks like a garden that could have been designed by a minimalist landscape architect – a 20th century garden: a white rectangle made of marble, divided up by three green rectangles. Two consisting of myrtle bushes, the other of water. This simplicity of structure could be the work of a modern architect. But of course, the garden is a product of history.”

The courtyard is not just an open space, but an integral part of the overall architectural scheme. The focal point: the water. In the large pool, one palace becomes two – the horizontal axis is interrupted, the vertical axis conveys a sense of sublime greatness. Gentle wave movements maintain the reflections in a constant state of motion, the light moves with the sun – spaces appear to lose their constancy, depths shift.

It’s not just here – water is a key element throughout the Alhambra. Its role is three-fold: as part of the architecture, as a spiritual symbol and simply to enhance a sense of wellbeing. 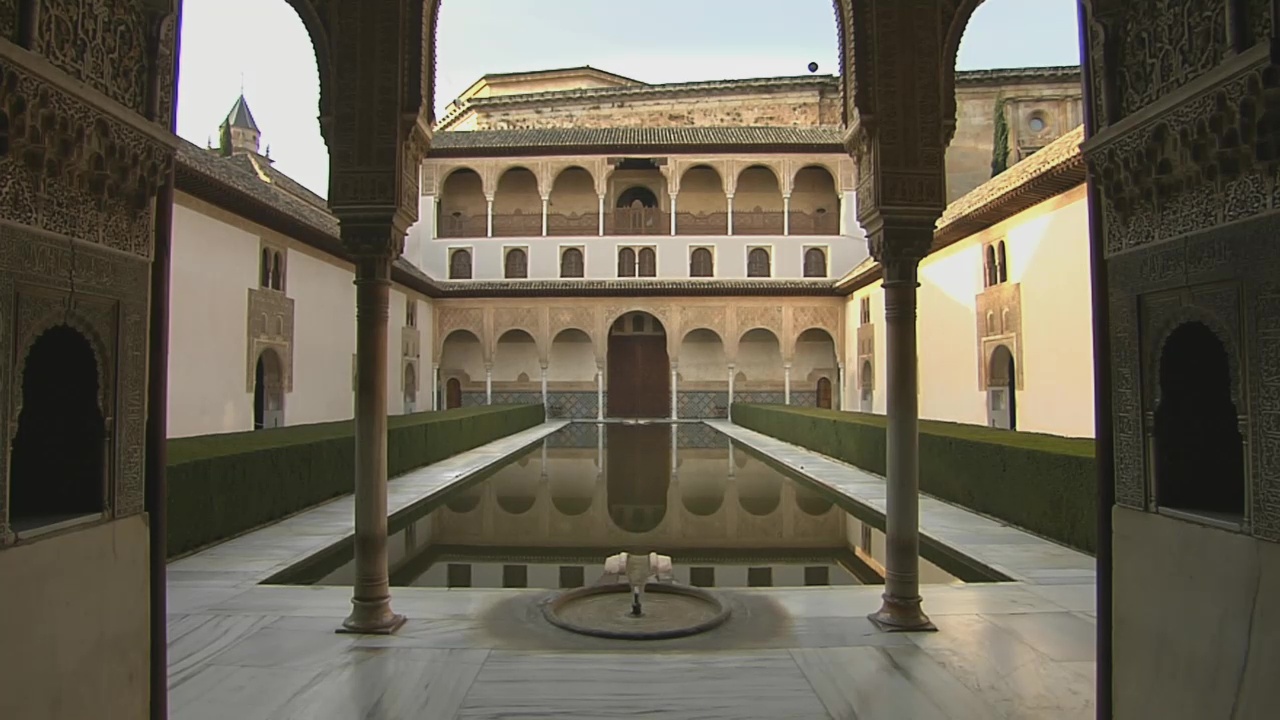 “Water is fundamental for Islamic civilisation and also, of course, for the growth of the fortress city, which thereby simultaneously consolidates its position of power. Right now we’re working on safeguarding components that are highly illuminating, such as the water conduits, the wells, the cisterns and water wheels that served to distribute the water.”

The Alhambra’s water supply – a highly complex system of streams, conduits, cisterns, subterranean pipes, pools and wells. The water is extracted from the Darro River more than six kilometres away. The Acequia Real, the royal canal, runs parallel with the riverbed.

The water was once routed into a hill, the Cerro del Sol. It could be scooped out of a well from above and channelled into a pool. Archaeologists have found circular tracks alongside the well – probably left behind by donkeys toiling at the bucket wheel.

Due to the difference in altitude, the reservoirs above the Alhambra provide for the necessary water pressure. The water is fed into courtyards and gardens, houses and bathhouses via conduits several kilometres long. The terraces, with their ornamental and kitchen gardens, are irrigated by streams.

Here, the Acequia Real leads directly through the Generalife Palace: a synthesis of functionality and aesthetics. The water stairway – a quirky feature that’s again functional: it’s’s also a conduit. The aqueduct that supplies the Alhambra is located at the external fortification ring – a weak spot in the event of an attack, the fortress’ Achilles heel. The Palace of the Lions was referred to by the Nasrids as the “Garden of Happiness”. Here, too, water was the focal point. The courtyard is divided by four channels. They might symbolise the four rivers of paradise – described in the Koran as streams of water, milk, wine and honey. The conduits were once bordered by orange trees – in paradise too, fruits and shade also await the god-fearing. So the “Garden of Happiness” provides a foretaste of paradise in the here and now. All the water channels run to the middle, the fountain of the lions.

The water then spews out of 12 muzzles. A sophisticated system ensures that the water level in the fountain remains constant.

The lions only appear to be the same. The sculptor has selected the marble blocks with care: The marbling enhances the simulation of the lions’ coats, and makes skin folds and manes look even more realistic. The origin of the lions is not certain. An 11th century poem describes similar lion figures in a palace apparently located close to the Alcazaba. One thing’s for sure - they are a symbol of power. Tensed and poised for action, they appear ready to jump up at any moment should the Sultan command it. 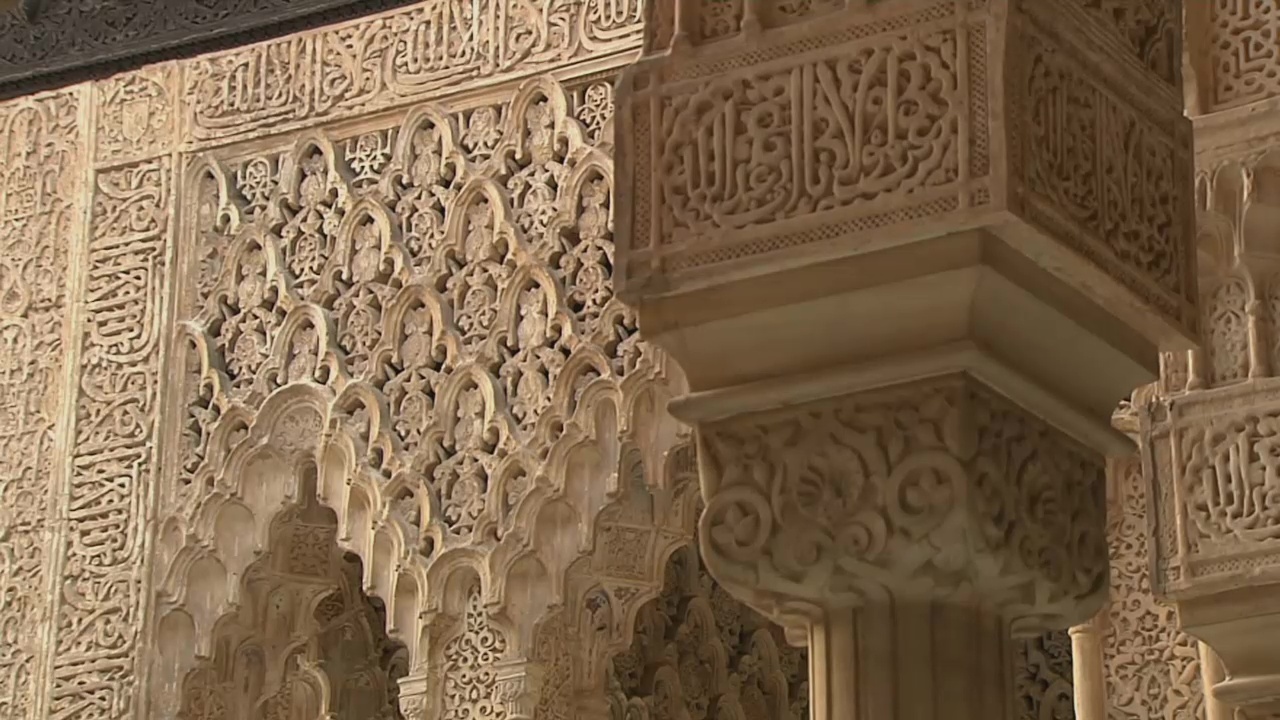 The fountain is a circle in the centre of the garden. Again, a geometric shape that alludes to the universe. Ibn Zamrak’s most famous poem has been carved into the outer edge of the fountain:

"Are there not in this garden wondersthat God has made incomparable in their beauty, and a sculpture of pearls with a transparently light,the borders of which are trimmed with seed pearl? Melted silver flows through the pearls, to which it resembles in its pure dawn beauty. Apparently, Water and marble seem to be one, without letting us know which of them is flowing. Don't you see how the water spills on the basin, but its spouts hide it immediately? It is a lover whose eyelids are brimming over with tears, tears that it hides from fear of betrayal."

At the same time, the water conduits link up the four halls around the courtyard. The wells in the marble floor improve the indoor environment, by cooling the air on the surface of the water. The lower sections of the walls have no windows. This means the warm air rises and escapes through the blinds – just as it does inside a fireplace. As a result, even in summer the temperature in these halls hovers around the 22 degrees Celsius mark – a great relief in a region where the mercury often climbs up to 40 degrees in the shade. The builders further optimised the effect by the positioning of the palaces: in summer, the main rooms are in the shade. In the winter the sun is lower, and its rays warm the interiors.

An alliance of architecture and nature – the flexible utilisation of space – the optimal application of natural resources: basic principles of a bygone civilisation – that at the same time provide pointers for future generations. 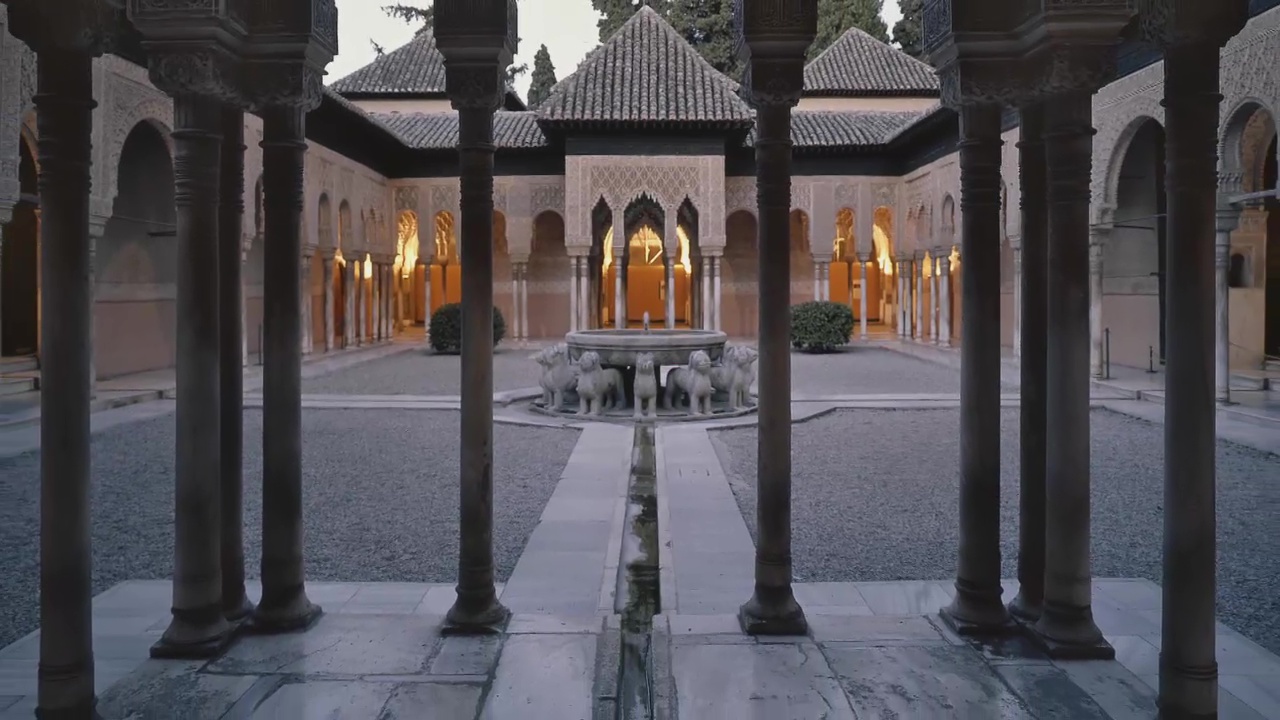