Cairo was founded in the 10th CE by the Fatimid dynasty, making it one of the world's oldest Islamic cities. 200 years later, Cairo became the capital of Egypt. It soon grew into one of the centres of the Islamic world, one of the most important places of Islamic scholarship, and an important trading centre on the route between Europe and Asia.

Today the urban area's estimated population of close to 20 million makes Cairo the largest metropolitan area both of Africa and the Arab world. It has grown to include the former Egyptian capital of Fustat and the city of Giza with its pyramids. Both the Old Town of Cairo and the ancient necropolis of Giza are listed by UNESCO as World Heritage.

The Light of Allah 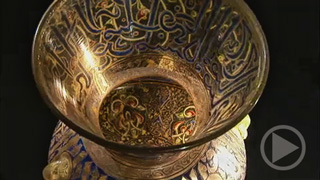 “Allah is the Light of the heavens and the earth”, says surah 24 of the Quran, the surah called "al Nur" or The Light. God brings light to the world, and oil lamps like this are hung in mosques. Lit from within, its dazzling beauty comes to life…
▶ The Museum of Islamic Art, Berlin▶ Cairo
02:20
This website uses cookies - for more information about this and your rights as a user, please see our privacy policy. Click on "I agree" to accept cookies and to be able to visit our website directly".