The city of Delft developed around a number of canals that were dug, or "delved", around a natural river - hence the name. As the residence of William of Orange, one of the leaders of the Dutch resistance against the Spanish, Delft became the de facto capital when the Netherlands declared their independence in 1581.

William was shot three years later and buried in the New Church of Delft - which has been the burial church of the House of Orange ever since.

Today, Delft is primarily known for the manufacture of blue and white pottery called "Delftware" and as the home town of the Golden Age painter Jan Vermeer.

Scenes from Real Life, with a Moral 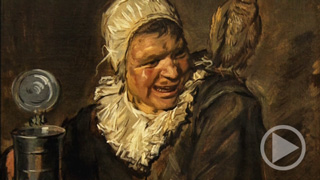 The 17th century was the Golden Age of the Netherlands. Wealthy burghers bought art in unheard-of quantities. And the masters of Dutch genre painting like Frans Hals, Jan Steen or Jan Vermeer delivered - always including moral caveats in their pictures…
▶ The Berlin Gemäldegalerie▶ Netherlands
08:28
This website uses cookies - for more information about this and your rights as a user, please see our privacy policy. Click on "I agree" to accept cookies and to be able to visit our website directly".