The Giza plateau, overlooking the Nile Valley almost 20 km north of the ancient Egyptian capital of Memphis, was used as a necropolis since the first dynasty.

However, it was the fourth dynasty pharaohs who began building some of the most astonishing monuments of antiquity - first and foremost Pharaoh Khufu, or by his Greek name, Cheops, who around 2560 BCE ordered construction of the largest pyramid ever, one of the Seven Wonders of the ancient world.

Over the centuries, the complex grew to comprise the three Great Pyramids, the Great Sphinx, several smaller pyramids, other royal mortuary structures, temples, cemeteries, a workers' village and an industrial complex.

Since 1979, the whole area has been part of the UNESCO World Heritage site of "Memphis and its Necropolis - the Pyramid Fields from Giza to Dahshur".

Providing for the Afterlife 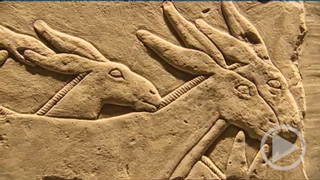 Old Kingdom tombs, created between 2,600 and 2,200 BC, show vivid scenes of Egyptian daily life. Like a comic strip this relief shows how farmers harvest grain to provide for the deceased Seshem-nofer, though their donkeys are none too happy about it…
▶ The Berlin Egyptian Museum▶ Giza
01:40 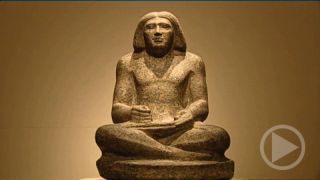 In ancient Egyptian textbooks, the profession of scribe is valued more highly than any other line of work; the “scribe statue” is a basic form of Egptian sculpture. This one was made around 2600 BC to show the social status of a member of the royal household.
▶ The Berlin Egyptian Museum▶ Giza
02:06
This website uses cookies - for more information about this and your rights as a user, please see our privacy policy. Click on "I agree" to accept cookies and to be able to visit our website directly".