Jordan, the land east of the Jordan River historically known as Transjordan, was always at the junction of great civilizations. In antiquity it was home to Semitic kingdoms, but for millennia, it was contested by neighbouring empires such as the Akkadians, Assyria and Babylonia, ancient Egypt, the Hittites of Anatolia, later the Achaemenid Empire of Persia and Alexander the Great's Empire, followed by the Hellenistic Seleucids. From about 150 BC, the Nabataean kingdom with its unique capital city of Petra flourished, the Nabataean alphabet was to develop into the Arabic alphabet. Protected by steep cliffs and the Jordan Valley, Petra is one of the country's major attractions.

If you're good on foot, do not only marvel at the huge, otherworldly palace-like facades carved into the sandstone. Find the tiny tomb on the top of a hill at the Western end, said to be the resting place of Aaron, the brother of biblical Moses.

After about two and a half centuries, like the whole region, the kingdom was incorporated into the Roman Empire, first as part of the client Judean Kingdom of Herod, later of the Judea Province.

From the 7th century AD, Transjordan belonged to the heartland of the succeeding Islamic Caliphates; for short periods of time, it was ruled by the Mongols and the catholic Crusaders. In 1516, Transjordan became part of the Ottoman Empire. During World War I, the Allies supported the Arab Revolt against the Ottomans. In 1922 Transjordan became a kingdom, albeit under British mandate. Only in 1946 it was recognized as fully independent; since 1948 the country's official name has been The Hashemite Kingdom of Jordan.

High Culture in the Desert: The "Winter Camp"

The Greatest Palace of Early Islam 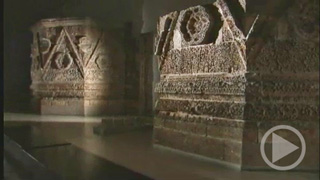 The facade of an unfinished palace near Amman is the greatest example of early Islamic architecture. It’s carved all over with scenes of paradise, done in incredible detail – vines, birds, griffins and centaurs, cattle and lions living in harmony…
03:49
This website uses cookies - for more information about this and your rights as a user, please see our privacy policy. Click on "I agree" to accept cookies and to be able to visit our website directly".