At the end of the 15th century the era began that was to fundamentally change all of Europe. Christopher Columbus rang in the age of discovery. Johannes Gutenberg with his printing press made learning available to a wide public; soon the Reformation would break the western European church apart. People’s thinking was changing, too. They no longer only set their sights on a better life after death, but turned to the real world.

This was by no means the end of religion. The search for God continued in nature – for the principles of His creation. Artists strove for perfect proportion, for harmony and ideal beauty to illuminate the greatness of God. Once again Italian artists were far ahead of the rest of Europe –especially in and around Florence. The link between nature and religion can be seen in the flowers that the Dominican monk Fra Angelico has given his Madonna. They are painted with great realism, but they have a symbolic meaning. The white lilies stand for purity, the thornless roses for the innocence of the Virgin Mary.

The paintings of Ayne Bru are testimony to the changes taking place in art in Catalonia. St. Candidus was a Roman legionnaire who refused to persecute Christians. Ayne Bru painted him as a knight in the ornate armor of his own time. The saint regards us somewhat skeptically from under his velvet beret. The realism and worldliness is in the style of the new way of thinking. But the golden background still belongs to the Middle Ages. 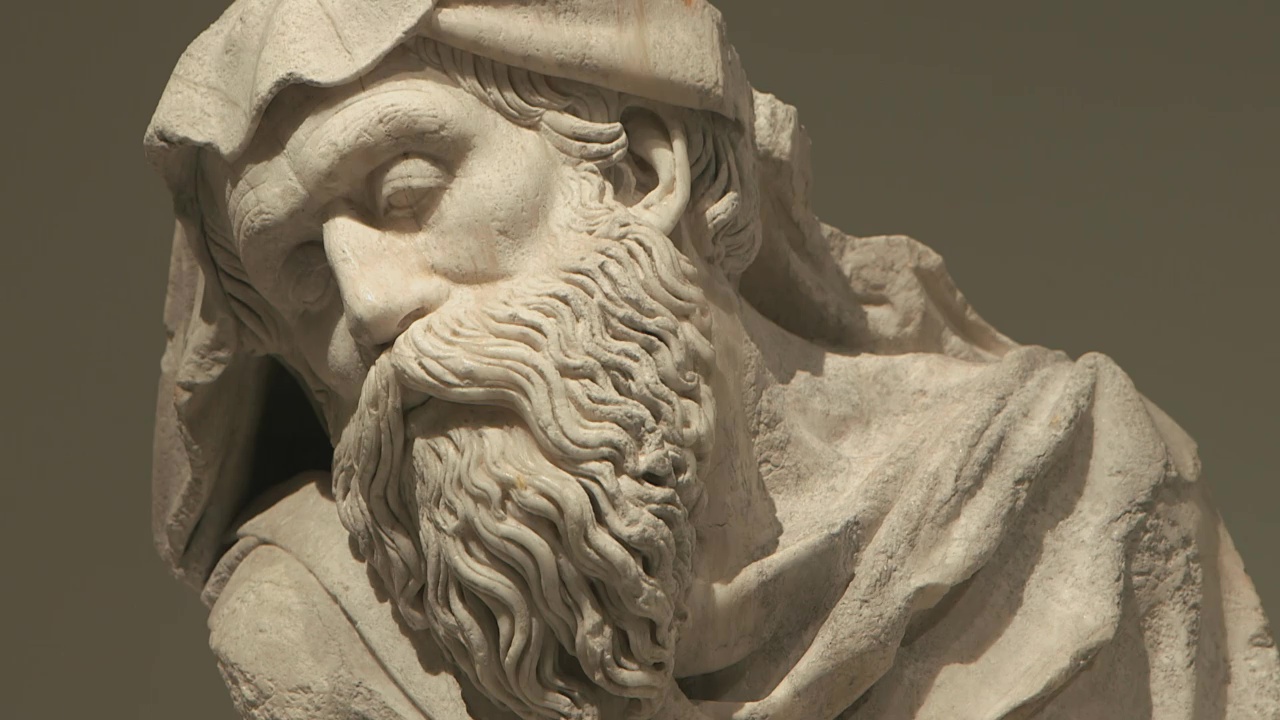 Saint Cucuphas, known in Catalan as Sant Cugat, was a merchant who became a missionary in Barcelona in the time of the Roman emperor Diocletian. He was martyred right here on the outskirts of the city. 1200 years later, a thriving monastery stood on the spot; the great Monastery of Sant Cugat de Vallés.

In 1502 Ayne Bru was commissioned – for a princely sum of money – to paint a new altar picture for the cloister church. He must have been very famous at the time. The artist’s original name was probably Hans Brünn. He hailed from Central Europe – and clearly loved his faraway native land. The landscape in the background isn‘t Spanish at all.

His figures are dressed in contemporary style. In part they are reminiscent of the Italian style of the Quattrocento. Bru had also studied in Italy. But the feature that is typical of northern European painting is the drastic realism that has made this work one of the Museum’s most famous pictures.

The pain and incredulity felt by the Apostles is plain to read in their faces. Mary, the mother of God has just died. Damià Forment, a sculptor from Valencia was a precise observer of the real world. During the Middle Ages sculptures represented types, such as “the prophet” or “the king.” That time was over – Forment modeled the apostles as real people – as individuals with feelings and thoughts.

Their robes with the abundance of folds resemble Roman togas; the Apostles’ beards make them look like Greek or Roman sculptures. In works like this antiquity experienced a rebirth, or – in French – a ‘Re-naissance’.

In Catalonia the Middle Ages ended with a bang: in 1469 Ferdinand of Aragon married Isabella of Castile. Ruling jointly as the Catholic Monarchs, they conquered the remaining Islamic Al Andalus kingdom, followed by Navarre. Spain was now unified – and the capital of the new realm was Madrid. Although Catalonia retained its autonomy, Barcelona was increasingly marginalized. With the discovery of America, trade in the Mediterranean became less important. Madrid was the new economic and political center – and in art, too, the Spanish royal court became a hub. That is why the next two centuries in the Catalonian National Museum feature almost exclusively Spanish artists – but they include some of the greatest artists of all time.

The apostles Peter and Paul are meeting after a disagreement over Jewish law. But their reconciliation is not complete – their arms are crossed but they don’t shake hands. The scene was painted by Doménikos Theotokópoulos, a true European: In his native Crete he had a reputation as an icon painter; in his mid-20s he moved to Venice, then to Rome and finally to Spain, where he hoped for royal patronage. That did not happen, but he remained in Toledo and became Spain’s best known painter. The Spaniards called him ‘the Greek’, using the Italian term ‘El Greco’.

The luminous colors, the legacy of his time in Venice, the play of light and shadow on the garments, and above all the haggard, elongated faces that give the saints an ascetic appearance – typical El Greco. Few painters developed such a characteristic style. 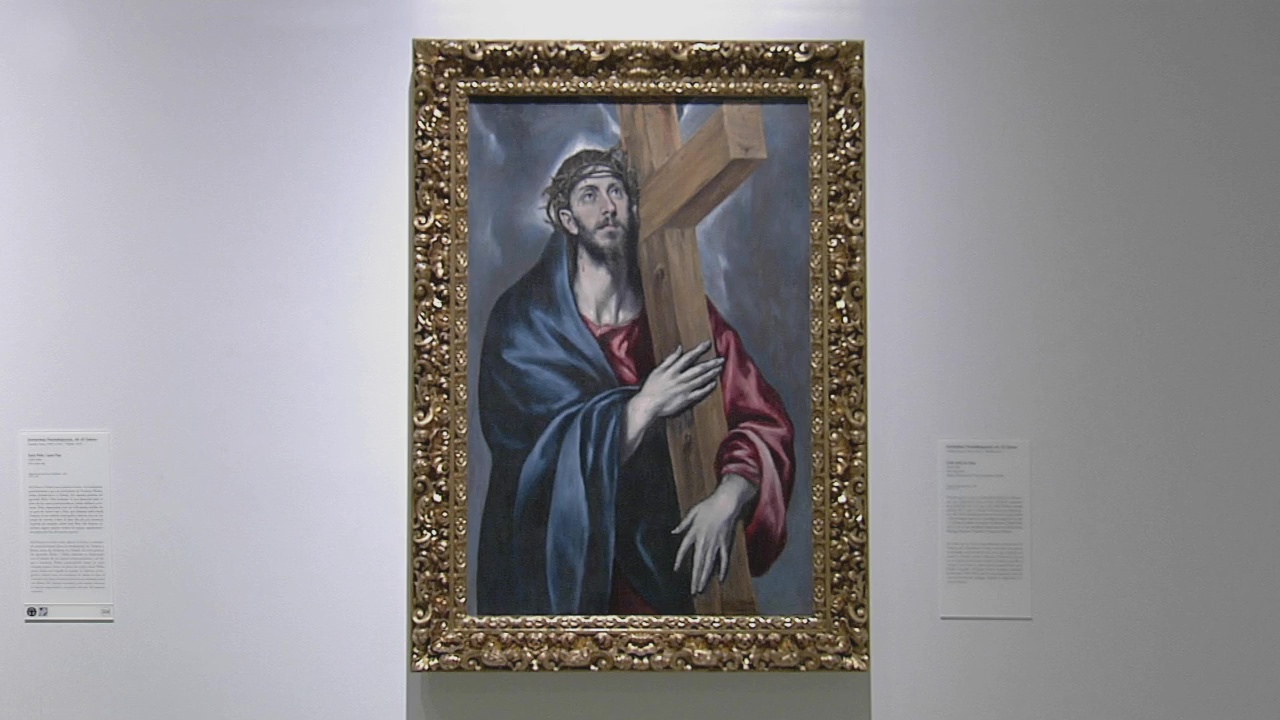 El Greco died in 1614. Five years later Diego Velázquez also painted the Apostle Paul. The muted, dark colors were fashionable at the time in Velazquez’s home town of Seville. Although he was only 20, Velazquez was already famous in Seville. Just four years later he was named court artist to Philip IV – not coincidentally, after he painted a portrait of the king.

Velazquez is in fact one of the best portrait-painters ever. We seem to see directly into Paul’s soul. One reason why Velazquez’s portraits seem so lifelike was that he he painted living models; and he often painted them directly with oil paints without initial sketches. In addition there is his command of light, the strong light-dark contrasts. All that is typical of the painting style with which the Italian artist Caravaggio had revolutionized painting a generation earlier.

José de Ribera also studied Caravaggio. Saint Bartholomew being flayed alive – Ribera shows it with brutal realism. During the Renaissance artists searched for ideals, for the presence of God in nature and in humans, but that had come to an end. Here nothing is idealized – and that is the way the church wanted it: the Counter-Reformation was in full swing, and the picture is intended to warn the viewer against contradicting Catholic doctrine.

The man chosen for this task was a Spaniard in Italy. José de Ribéra was born near Valencia, but emigrated to Naples. There his contemporaries called him Lo Spagnoletto – the little Spaniard. He is considered the great master of the Neapolitan school alongside Caravaggio.

Ribera used even more extreme light and dark contrasts than the young Velazquez to heighten the dramatic effect. St. Bartholomew’s wide-open eyes are hypnotic. Pictures like this mark a new epoch in art history: the Baroque period. It turned away from classical, symmetrical proportions to a more dynamic and dramatic style.

Birth of the Baroque

These Italian paintings come from a Spanish church; San Giacomo degli Spagnoli is the Spanish national church in Rome. In 1602 the Castilian nobleman Juan Enríquez de Herrera commissioned murals for a new chapel. They were done by Annibale Carracci, like Caravaggio a pioneer of Baroque painting.

On the sides of the chapel he tells the story of St. Diego of Alcalá, who was a missionary among the natives of the Canary Islands. In the middle is the Assumption of Mary – observed by the awe-struck apostles around the Virgin’s empty grave.

That the fresh, delicate colors are reminiscent of Raphael is no coincidence. Carracci studied his paintings carefully. This is the other side of the Baroque – not the grim dramatic scenes, but ones full of life and movement.

Like Velazquez, Francisco de Zurbarán was court painter for Philip IV. The two artists were almost the same age. Zurbarán’s Immaculate Conception is one of the masterpieces of the Museu Nacional, a painting full of a mystical atmosphere.

In the center is the Virgin with an expression of utter innocence. What at first glance looks like a wreath of clouds is a gloriole made up of angels. In the clouds are symbols of Mary’s virtue: Jacob’s ladder, the unblemished mirror, the Morning Star, and the gates of heaven. The angels are singing a text from the Song of Solomon: “Quae est ista quae progreditur quasi aurora consurgens:” ‘Who is she that comes forth as the morning rising’. Two scholars recite words from the hymn ‘Ave Maris Stella’: Monstra te esse matrem, …Mites fac et castos – Show thyself to be a mother, … make us meek and chaste.

Less than 10 years after Zurbarán painted the picture, Catalonia rose once again against Castile. In 1640, on Corpus Christi day, a bloody uprising broke out, the Guerra dels Segadors, or Reapers’ War. It is still recounted in the Catalan anthem, an appeal to defend Catalonia and its people. The fighting continued for more than a decade during which the Catalans declared a republic – but ultimately were defeated. They had to give up the northern part of Catalonia – the country of Rousillion – to France. 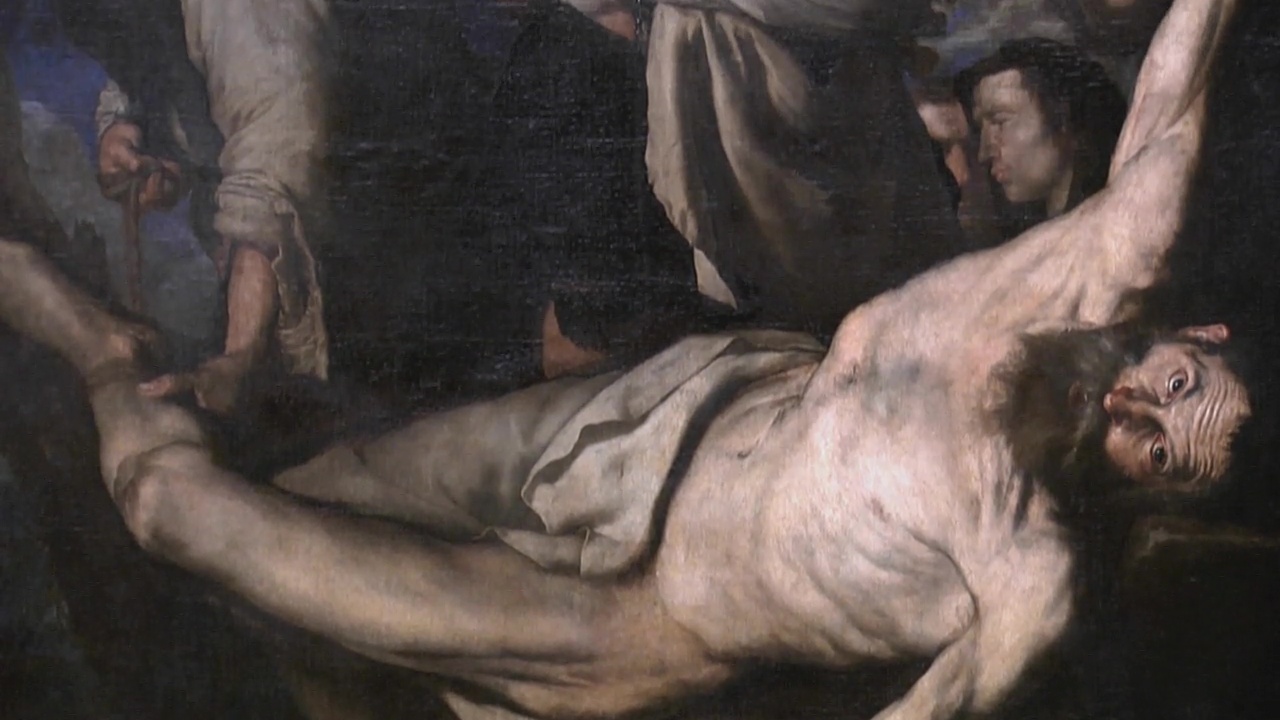 Two generations later war broke out again. This time it was about the Spanish succession. The Catalans took the side of the Hapsburg archduke Charles. That was the wrong decision. After years of fighting the war was won by the French claimant Philip of Anjou, a grandson of Louis XIV. His Bourbon dynasty is still the royal family in Spain. After his coronation, Philip took his revenge: Catalonia lost its autonomy; the kingdom of Valencia was dissolved. All the laws now came from Madrid, with the king appointing the main officials. Only Castilian was to be spoken in public life.

But Barcelona continued to resist. Philip besieged the city for more than a year; on September 11, 1714 it finally surrendered. The day of defeat is still marked as the ‘Diada de Catalunya’, the National Day of Catalonia. It commemorates the low point in Catalan history, the day on which Catalonia ceased to exist as an independent state.

It would take another century for the Catalans to rediscover their own culture. And more than two hundred years later a glowing Catalan patriot would make a huge donation to the Museum. It was the politician Francesc Cambó. He wanted to enlarge the outstanding legacy of the Middle Ages – and gave the Museum works from across Europe – paintings by Renaissance masters like the Venetian Titian or Lucas Cranach from Germany. And paintings from the Baroque, from the golden age of Flemish painting – like Peter Paul Rubens – and the French Rococo.

‘À l’espagnol’ – Spanish style – that was a term for extravagant clothing. Here Jean-Claude Richard, the Abbot of Saint-Non is posing à l’espagnol. The aristocrat, cleric and artist was a friend and patron of Jean-Honoré Fragonard, the great Rococo painter. Like Watteau, Fragonard was a master of lightness. Cheerful colors, fast brushstrokes – with his manner of painting he was a forerunner of Impressionism. When Fragonard died in 1806 the Industrial Revolution was in full swing. It was to give Catalonia its second flowering – and with it the revival of Catalan culture, the Renaixenca.