"This painting by Peter Paul Rubens represents a link to the Bruegel family. Jan Bruegel the Elder was a good friend of Rubens' and commissioned this work for the tomb of his father, Pieter Bruegel The Elder."

Christ gives the keys to heaven to St Peter, his representative on Earth and Peter Bruegel's namesake. When he painted this in 1613, Rubens was already renowned throughout Europe. He was a true cosmopolitan: He was born in 1577 in Siegen, grew up in Cologne and Antwerp, then spent eight years in Italy, where he became court painter in Mantua. In 1608 he returned to Antwerp. He was appointed court painter to the Spanish regents of Flanders, Archduke Albert and Archduchess Isabella, but also worked for the French, English and Spanish courts. And not just as a painter. Isabella also sent him on diplomatic missions, amongst others to Madrid. 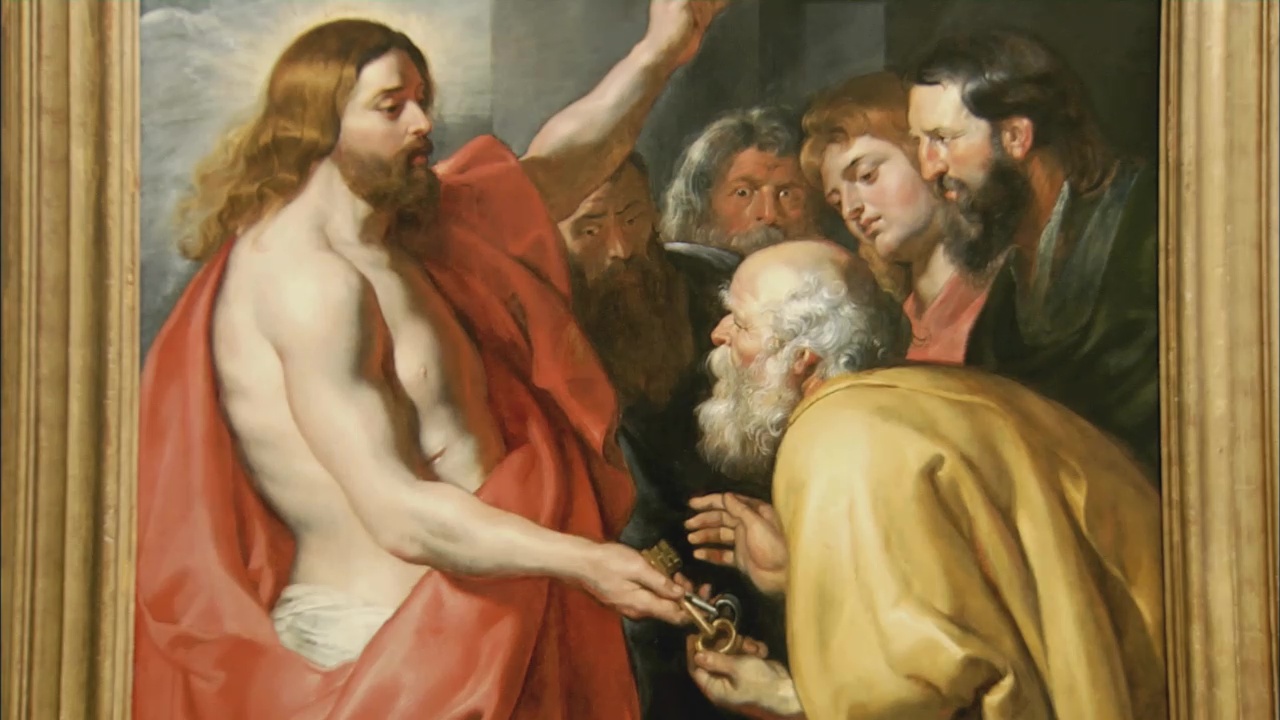 A few years later King Philip the Fourth of Spain sent him to peace talks in London. Rubens was so successful that Philip elevated him to the nobility. Just months later, he was knighted by King Charles the First of England, too. Rubens conducted himself at the courts of Europe with confidence and skill, and not only because he could speak five languages.

"I consider him to have been one of the most intelligent and certainly one of the most highly educated artists of all time. He could read all the sources in the original language. He had a huge library and amassed an enormous art collection in his house. Including a mummy! As well as works by Raphael, Titian – all the great European painters were to be found in his private gallery. And his house was not just a house, it was a princely palazzo, with spacious private quarters and an enormous area devoted to the production of paintings."

That is where Rubens' pupils worked. And they kept growing in number. He soon became so famous that he could not carry out all his commissions on his own. He would create a modello for a new work, a sketch in oils. These sketches are brilliant: with just a few relaxed brush strokes and a little colour he created small masterpieces. The execution of the full-scale work was then the task of his assistants. This small sketch from 1627 was for an altarpiece in a church in Antwerp - which would measure six meters by four!

When a painting was almost finished, the master would go over it himself, adding the finishing touches and making it an authentic Rubens. Like Lukas Cranach, he was the chief designer in his workshop, the creative force behind his brand. It was of secondary concern who actually wielded the paint brush.

"The idea is more important than the work. His intellectual powers are what made him such an extraordinary artist."

Those powers are most evident in his complex narrative works: he can tell an entire story in a single picture. That is why he was revered as the "Homer of Painting". This depicts a story from The Metamorphoses by the Roman poet Ovid. Andromeda, the king's daughter, is chained to a rock and about to be sacrificed. The hero Perseus saves her at the very last moment. But Rubens shows not only the rescue, but also what had happened before: Perseus cut off the Gorgon Medusa's head. Some of the snakes that made up her head of hair can be seen behind his shield. The winged horse Pegasus sprang from her decapitated body, and carried Perseus across the sea to Andromeda. He killed the sea monster to whom Andromeda was to be sacrificed, and now he is freeing her.

As Perseus surges forward to Andromeda, he has already fallen in love with her delicate beauty. Perseus's dynamic gesture is typical for Rubens: He did not paint static figures but brought people to life. The bright light enhances that effect – here it makes Andromeda's body look so delicate and sensitive. 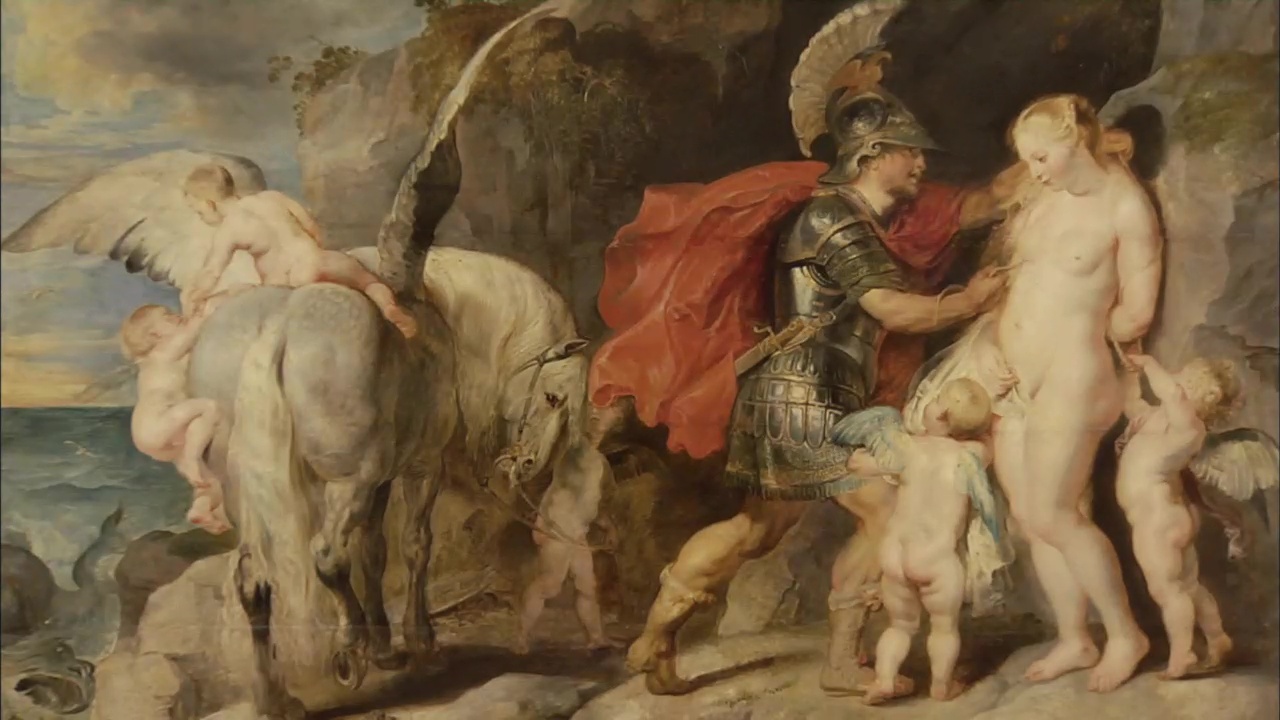 There are many levels to Rubens' narratives. His paintings can often be read as alluding to contemporary political concerns. Perseus can be interpreted as a military leader or king who is liberating a country—in the person of Andromeda—from shackles and from the monster that is war. Europe was then in the grip of the Thirty Years War. And Rubens hated war.

This engraving reveals how important the myth of Perseus and Andromeda was for him: A picture of them hung over the entrance to his mansion. And almost twenty years later he painted Andromeda again. This time the model was his second wife, Hélène Fourment. When they married in 1630 Rubens was 53 and his bride had just turned sixteen!

This was probably Rubens's last painting. It shows Hélène as Saint Cecilia. Both works hung in his house. He never sold them.

Such women of ample proportions and often rosy hue are typical of Rubens. At the time they were much in favour. And he painted them with unsurpassed vitality. Even today one can speak of a Rubensian figure.

Rubens was educated, worldly, a European, and a master of the Baroque. Few other artists have had such an enduring influence in almost every genre. His pupil Anthony van Dyck moved to England. And long after his death, Rubens, via van Dyck, was still exercising an influence on 18th-century English painters.

But Rubens had also learned from others. As a young man in Italy he studied the Old Masters as well as the revolutionary paintings of his contemporary Caravaggio.