A New Vision of the World: Inventing the Renaissance

The first major turning-point in western painting began at the start of the fifteenth century. Suddenly Europeans began to see – and to paint – themselves and their world in a new way. Throughout the Middle Ages painters had only created religious pictures, above all altarpieces. They were not concerned about realism. On the contrary, they wanted to illustrate stories from the Bible. They placed their subjects in an abstract architectural setting or against a backdrop of precious gold – removing them from the context of life on earth. In 1425, the Duchy of Burgundy was at the height of its prosperity and prestige. Duke Philip the Good maintained the most splendid court in Europe and summoned to serve him a young painter he described as unmatched by any other – Jan van Eyck. His pictures were new and different. Nobody else could depict the world the way he did – the real world, the world people lived in.

As in this work, the left panel of a portable altar. A huge Virgin Mary with child stands in a Gothic church, which van Eyck painted in great detail. Although the picture is no larger than a standard sheet of paper, one can even see through the windows the tracery on the exterior. But the building depicted never really existed: as in mediaeval paintings, it merely stands for the institution of the Church. Yet van Eyck made it look like a house of worship his contemporaries might know from their everyday lives.

The nave is filled with magnificent light -- which symbolizes the Virgin Mary. It is no ordinary light, but divine. And here is the proof: as the altar is located at the east end of a church, this means that here the sun is shining in from the north! Jan van Eyck was able to make light look so luminous – more so than any artist before him -- because he had mastered a technique that was little-known at the time -- oil painting. The results were so sensational that he soon became the stuff of legend.

“By the 16th century at the latest – and in Italy, to be precise – the story was going around that Jan van Eyck had actually invented oil painting. That tale continued to be elaborated and adorned with anecdotes about how he came to paint in oils. In Italy, such painting must have seemed very unusual and new, because well into the 15th century it was common practice there to paint almost entirely in tempera. Things were different north of the Alps. We now know that oil painting was already being practised in Germany, for example, by the 13th century. But it was Jan van Eyck who perfected the technique in the early 15th century. That enabled him to paint such subtle gradations, transitions and nuances and, above all, such deep shadow and bright light."

The quality of the light is entirely new. There is nothing like it, not even a hint, in earlier works. Then suddenly it is there in Jan van Eyck. And when he died in 1441, it was basically gone again. No other artist even comes close in this respect – the atmosphere, the texture and quality of surfaces, and above all the play of light that we see here in The Madonna in the Church. You have to wait until the early or mid 19th century for anything like it to reappear. Until then, van Eyck remained unmatched.

The genuis of Jan van Eyck is not only evident in his treatment of light – he also painted the figure of the Virgin Mary in an entirely new style: her face is much less stylised than in mediaeval painting – she looks like a real young woman. 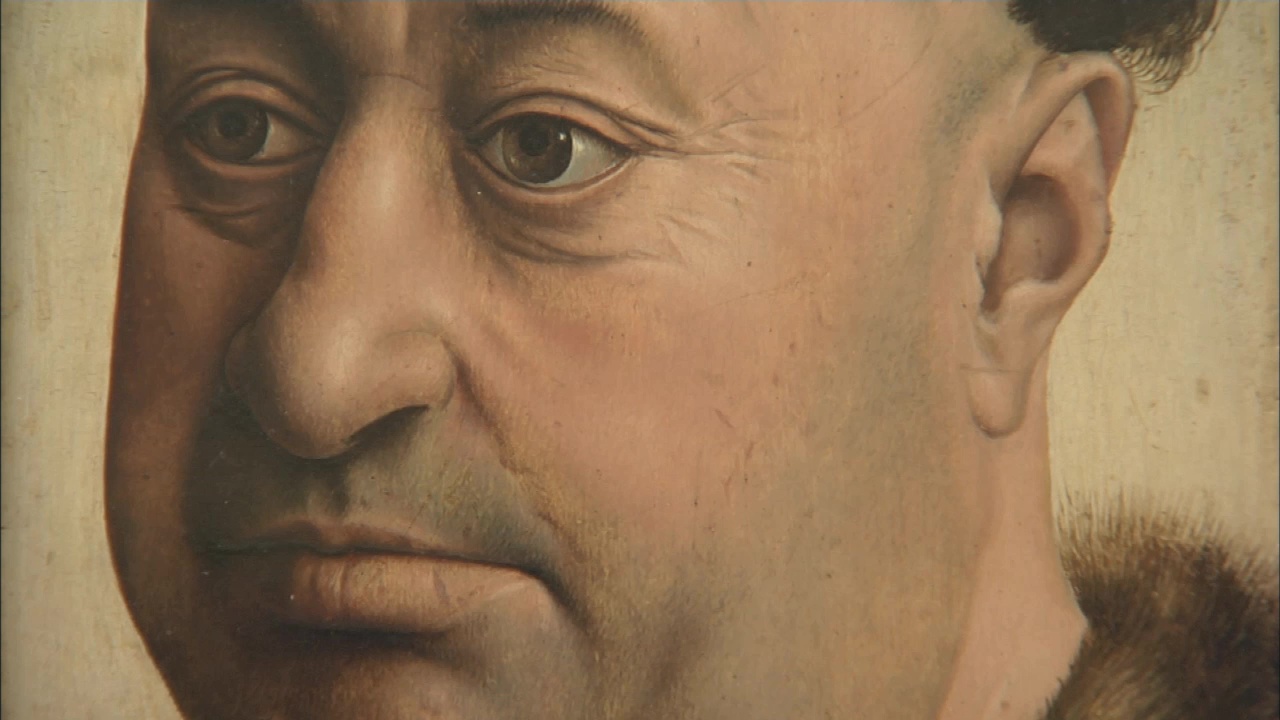 The new realism is even more amazing in this “Portrait of a Fat Man”. He is perhaps the nobleman Robert de Masmines, who died a short time later in 1430. The fur collar, the double chin, the stubble, the wrinkles around his eyes and on his forehead – they are all masterfully depicted. This was a revolution – a picture that shows a human being as an individual! In mediaeval painting, human figures merely represented certain functions – king or bishop, for example. But here it is as if we are looking at the real Monsieur Masmines, just the way he was. With paintings like this, a new genre was born: the portrait.

We don’t know who the painter was. He is referred to as the Master of Flémalle. A theory currently in favour is that this "master" was not a single person but a group of artists employed in the workshop of Robert Campin in Tournai.

We do know however that a former assistant to Campin named Rogier van der Weyden painted this "Portrait of a woman with a Winged Bonnet" in about 1435. The beautiful woman may have been his wife. She must have been prosperous and had a maid. She would have needed her help to put on such a complicated head-dress. Van der Weyden was also obsessed with details – the pins that secure the bonnet – the delicate skin shimmering through the fabric – the hands with their perfectly delineated fingernails.

This woman manifests even more personality than the fat man – she is looking right at us in an open, friendly way. The depiction of individuals heralded the birth of a new era, the Renaissance.

Rogier van der Weyden would come to surpass all his contemporaries. The scholar Nicholas of Cusa called him “maximus pictor“ – the greatest painter of his time. Van der Weyden was unrivalled in his ability to tell stories in his paintings. This altarpiece dating from 1455 illustrates the life of John the Baptist.

The story begins on the left: We see two women entering a room. They are probably midwives... Saint Elisabeth is in bed, having recently given birth. In the foreground, her baby is in the arms of the Virgin Mary. Next to her is Zachariah who has been struck dumb and is unable to speak until he writes down the name of his son – John.

The centre panel of the altar shows the Baptism of Christ thirty years later – Saint John’s most important deed. God the Father appears in heaven and says: “This is My beloved Son, in whom I am well pleased. Hear Him!”. Between the Father and the Son, the Holy Ghost appears in the form of a dove. 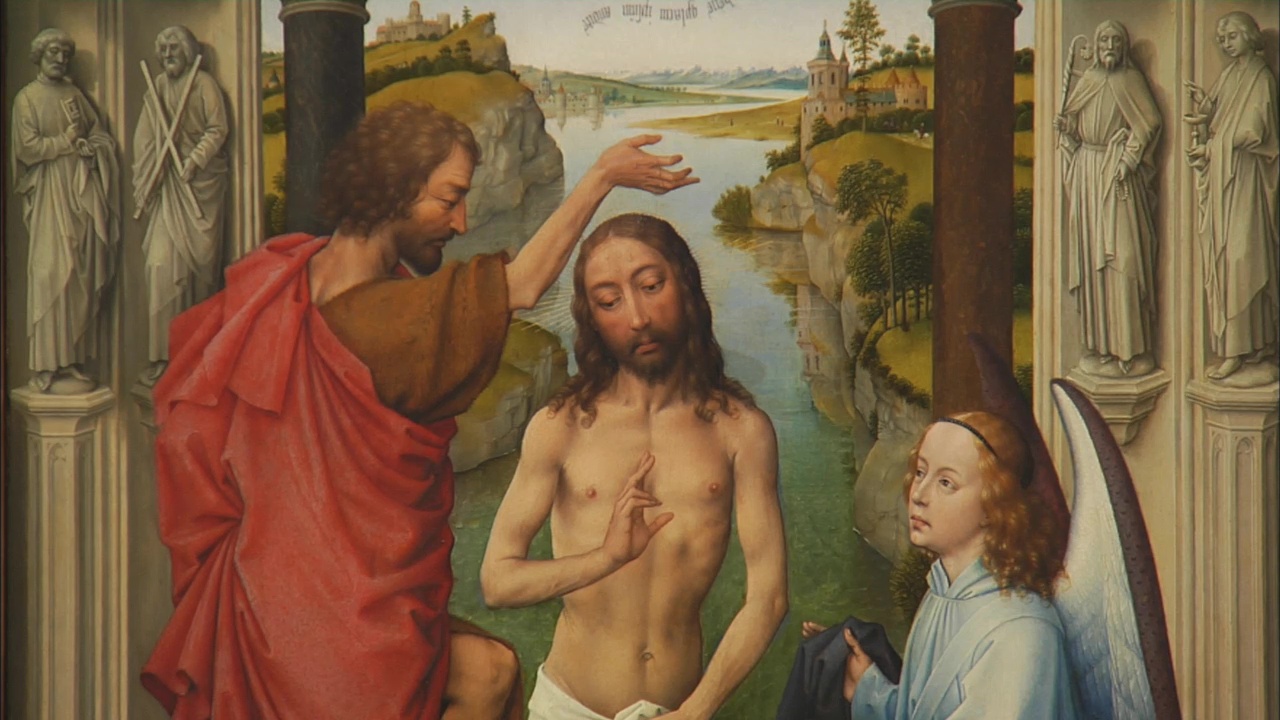 The panel on the right shows Saint John the Baptist’s horrible death: Salome, spurred on by her mother Herodias, has demanded his head. Salome and the executioner look away from their crime. Finally, in the rear, Salome presents John's head to her mother. On the right a path leads out into the countryside.

Like Jan van Eyck, Rogier van der Weyden sets the Bible stories in his own world. Gothic arches frame the scenes, and painted reliefs locate the stories in the Bible. The stories are ordered chronologically from left to right, starting with the angel telling Zechariah that he will have a son – to the birth of Christ – to Salome’s dance.

The Gemäldegalerie has the world’s largest collection of works by Rogier van der Weyden. He is considered the founder of Early Netherlandish Art, along with Jan van Eyck and the Master of Flémalle. They all sought God in the here and now. Van der Weyden painted even the body of Christ in an amazingly naturalistic way. In the background, a landscape with river, people on its bank, mountains in the distance, and reflections in the water. These are not merely incidental details, but God’s own creation, proof of his greatness.

Nonetheless, these three Netherlandish Masters remained rooted in the Late Middle Ages: None of them used central perspective. That was to be the great achievement of Renaissance painting.