The Renaissance in Central Europe

Peasants, flowers, and hell – there was a Bruegel who excelled at each. The founder of the dynasty was Pieter Bruegel the Elder, dubbed "Peasant Bruegel". Nobody else painted such lively pictures of ordinary people – and their folly. His famous work "The Dutch Proverbs" is a compendium of human shortcomings – as recorded in 120 proverbs. And things have not changed much since 1559.

We still fall between two stools.
Or beat our head against the wall.
Turncoats pursue their aims ruthlessly.
And big fish still eat the little fish.
If you can hardly wait for something,
you are sitting on hot coals.
If you find someone after your own heart, you are inseparable
... You are in it together.

Even today, it is not decency that prevails, but lies and deception. The world is on its head. "The World Upside Down" is the name the painting bore back then. An alternative title was "The Blue Coat". A young woman is hanging one over her old husband's shoulders, in the middle of the village. What that means is that she is cuckolding him. The height of depravity is illustrated directly above them, in the centre of the work: Confessing to the devil, and lighting candles for him. A monk attaches a false beard to Jesus, betraying even the lord.

Though the pciture might seem worldly-wise and cynical, Bruegel was only about thirty when he painted it. He reflected on political matters, and in many works he criticised the status quo. It is said that on his death bed he told his wife to burn any compromising drawings. And that was just ten years after he had painted the “Proverbs”. Pieter Bruegel the Elder died at the age of forty. 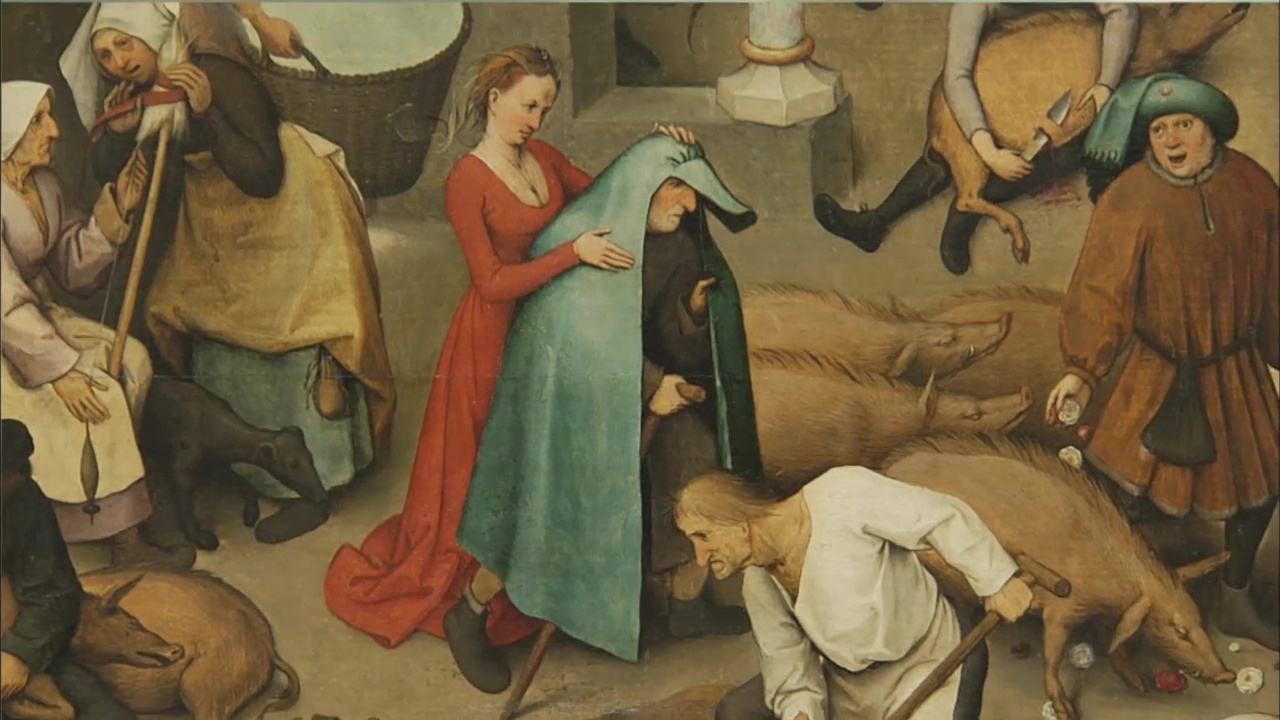 Like Jacopo Bellini and Lucas Cranach, he had two sons. His first-born assumed his mantle after his death: Pieter Bruegel the Younger continued the workshop and the Bruegel brand. He was nicknamed "Hell Bruegel". He painted Christ Carrying the Cross almost forty years after the death of his father, but entirely in his manner.

That gave his younger brother Jan the freedom to explore new possibilities. He went to Italy, and mastered new techniques and styles – and would prove much more innovative than his elder brother. Jan is best known for his paintings of flowers. That earned him the nickname "Flower Bruegel" – and plenty of money.

In the early 17th century, flowers were big business in the Netherlands. Tulip bulbs of rare varieties were selling for ever higher prices. A speculative bubble grew and grew - and then, in 1637, burst in a massive crash.

This still-life by Bruegel dates from around 1620. On the vase, earth and water personified...they form the matrix that sustains the rich array of flowers. The bouquet is not real but ideal, composed of flowers that blossom at different times of year. In the age of heated greenhouses, that is something we might easily overlook. Back then such a bouquet could never have existed.

Yet Bruegel paints it very realistically, even down to the insects. Butterfly, caterpillar, ladybird, grasshopper – more than a dozen tiny creatures live among the flowers, and feed on them. And that is the point: Flowers blossom briefly then die. The bouquet is not just beautiful, it bears a message. This is what Bruegel wrote on another painting:

"Why do you look upon the beautiful flowers that stand before you? They shall wither and fade in the blaze of the sun. Attend to God's word alone, for it blooms eternal. The rest of the world turns into nothing!"

History repeated itself one more time: Jan Bruegel's eldest son, Jan Bruegel the Younger, continued the tradition and also became a famous flower painter. His Feast of Bacchus was a true copy of a work by his father.

Both Jan Bruegels, father and son, also worked in Antwerp in the workshop of another painter. Jan Bruegel the Younger probably painted the flowers in this painting, and Frans Snyders the fruit. The overall composition was by yet another painter in the workshop. It was, however, the master himself who completed the madonna and child. And he was one of the most astounding figures in the history of art – Peter Paul Rubens.