There is hardly a painter whose life is more wrapped in mystery and legend than Michelangelo Merisi. A reputation as a shady character has endured through the centuries: It is said he hung out in seedy dives, had a fierce temper, picked fights, and even murdered somebody. Not a pleasant fellow. We know a lot about his life from police files. We also know that he was one of the most thoughtful and judicious artists of his day. He was considered to be both rough and vulgar – and a tremendously gifted visionary.

We can now scarcely distinguish between legend and fact. What is certain is that Michelangelo Merisi changed the course of art history. He took the name of the small town near Milan where he was born in 1571 – Caravaggio. In his mid-twenties he went to Rome. There he met Marchese Vincenzo Giustiniani, the wealthy scion of a family of merchants, art collector and patron, who would become one of his main supporters.

Caravaggio painted Cupid as Victor for him in 1602. It illustrates a line from Virgil: "omnia vincit amor" – "love conquers all".

Strewn on the ground lie emblems of various human endeavours: music – geometry – architecture – literature – war – political power – all trampled underfoot by Cupid, for love is stronger than them all. Caravaggio makes quite clear what kind of love he means. The pose of his young god of love is unambiguous. And he grins teasingly. The arrow he is holding and the tip of his left wing both point towards his penis. Caravaggio painted a very real earthly boy, in uncompromisingly realistic fasion, right down to his dirty toe nails.

We even know who the model was: Francesco Boneri, known as Cecco del Caravaggio, his pupil and perhaps his lover. He painted this picture ten years later, Christ Expelling the Money Changers from the Temple.

It was considered scandalous to simply have a young boy of the people strip and pose as Cupid! Customary at the time was to construct pictures of idealised bodies after meticulously drawing the outlines. But not a single drawing by Caravaggio exists. He would bring a model into his studio, scratch a few lines into the canvas with the wooden tip of his brush, and then start painting in oils straightaway. 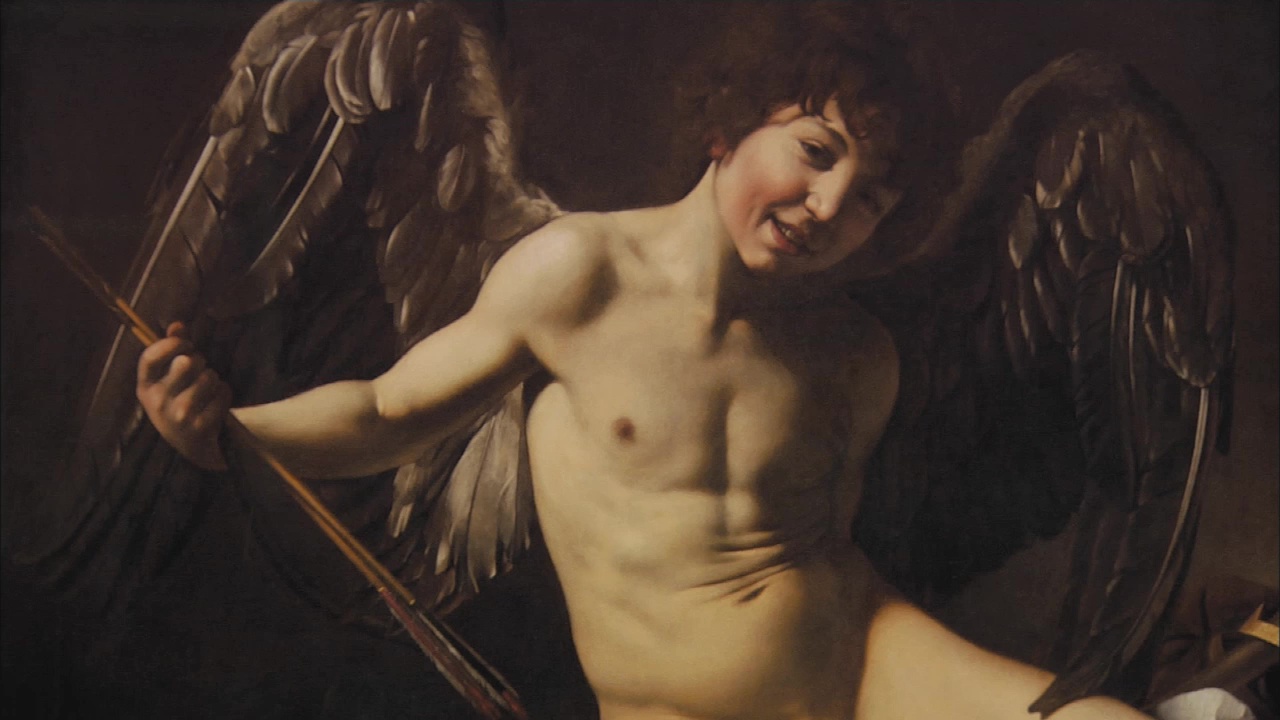 His work attained a new immediacy and intensity of expression, enhanced further by the dramatic lighting... it is as if Cupid were under a spotlight, standing out against the dark background. Caravaggio advanced and perfected the technique of chiaroscuro – or light and dark – painting, and influenced an entire generation of painters.

Dramatic contrasts of light, movement, realism replaced classical ideas of harmony and order. The Baroque was born. For Vincenzo Giustiniani's brother Benedetto this realism went a bit too far. He was a cardinal, and found Caravaggio's Cupid much too sensual. Caravaggio often had trouble with commissions from churchmen. While the prelates might admire his dramatic lighting, they found the people he depicted looked vulgar. Which isn't surprising. It was said Caravaggio used prostitutes as models for saints or the Virgin Mary.

Cardinal Giustiniani commissioned another version of the Cupid motif – from none other than Caravaggio's sworn rival Giovanni Baglione. In his version, divine love has thrown earthly love to the ground. The devil looks aghast. Sacred love is about to destroy profane love with a fiery arrow.

Baglione did borrow the dramatic lighting from Caravaggio. Yet he painted his figures in highly artificial Mannerist fashion. No one could really hurl a spear with a hand in such a twisted pose. And the body of Sacred love, looks as if it was put together out of disparate elements. The torso and limbs don't really hang together. To disguise that fact, Baglione draped a cloth over the armour. And Love's face is anything but life-like.

While Baglione painted in traditional manner, Caravaggio was revolutionary in his naturalism. Caravaggio made a lot of enemies – because of his success, and also because of his nasty temper. When he was accused of murder, he fled Rome. He first went to Naples, then to Malta. In 1610 the great artist died a miserable death in the malaria-infested harbour of Porto Ercole, just 38 years old.

Caravaggio's patrons, the Giustiniani brothers put together one of Europe's greatest art collections. Two centuries later, part of their collection had ended up in Paris. When King Frederick William the Third of Prussia visited the city in 1815, he was so impressed by the Musée Napoleon that he decided Berlin must have such a museum too. 157 works from the Giustiniani collection happened to be for sale, including five Caravaggios. Frederick William bought the lot. Baroque paintings may not have been in favour in the early 19th century, but the Royal Museum that was to be established in Berlin aimed to present the entire history of art. The lot cost the Prussian state five hundred thousand francs. 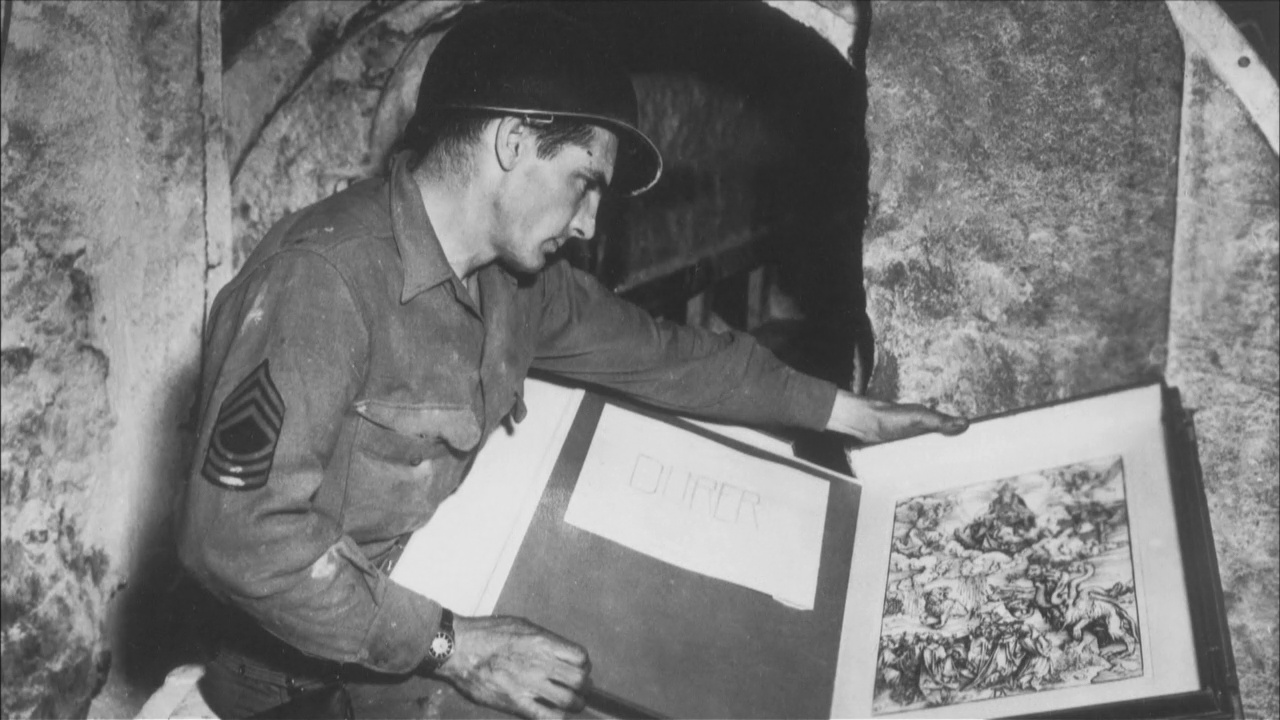 Many of those 157 works were lost during the darkest chapter in the history of the Gemäldegalerie. When the first bombs of the Second World War hit Berlin, the most important works were hidden in huge bunkers.

"The paintings in the Bode Museum – which was then called the Kaiser Friedrich Museum – were first taken to the flak tower in Friedrichshain. From there, many were taken to the Kaiseroda mines in Thuringia, in Central Germany, for safe keeping. After the Americans and the British captured the region, they were taken westwards to Celle and Wiesbaden. The works that remained in Friedrichshain may have been destroyed by fire. No one knows for sure. In the literature it says "location unknown". A thousand or so other works stayed here in the basements on Museum Island, in the air-raid shelters. And those are the works of art we were able to display when this part of Berlin belonged to what was then East Germany – along with the things that were returned from the then Soviet Union in 1958."

So the paintings that were not in bunkers during the war had survived. But more than 430 irreplaceable masterpieces were lost, including works by Bellini and Cranach, ten large canvases by Rubens, and three of the five Caravaggios from the Giustiniani collection. Two survived: Cupid as Victor, and Doubting Thomas, which is now at Sanssouci Palace in Potsdam. After the war Berlin was cut in two, as was the collection. During the Cold War, East Berlin and West Berlin each made do with the pictures it had. The Bode Museum on Museum Island was in the east. A new gallery opened in West Berlin in the suburb of Dahlem.

It was not easy for the curators to manage the two separate parts of the original collection. Many of the most precious paintings were in the west, while all the catalogues were in the east. The collection was only reunited after the Berlin Wall came down. The Gemäldegalerie's new home opened in 1998. It was a moving moment for all those who had suffered for decades because of the division.

"It was such an experience to see the collection together in one place for the first time since 1939 here in the new building on Kemperplatz. On the one wall hung an altarpiece from East Berlin, opposite was its counterpart from Dahlem. That was incredible!"

There are, however, plans to move the Old Masters yet again – to a new building in front of their old home, the Bode Museum, thus reuniting them with the treasures on the Museum Island World Heritage site.