A half-length portrait of a young musician. It is a motif Caravaggio also painted. Frans Hals, a contemporary of Rembrandt, had seen the works of the Utrecht Caravaggists – but was inspired less by their use of light than the everyday themes and motifs.

This picture was probably part of a series illustrating the five senses – and represented hearing. Such genre paintings, scenes taken from ordinary life, were very popular in the 17th century. They hung in burghers' parlors... and did not merely serve as decoration. The northern Netherlands were strictly Protestant, and the paintings almost always contained a moral message.

Here, Jan Steen depicts the baptism of a baby – while illustrating the proverb: "As the old birds sing, the young ones twitter" ( – in other words: like father, like son). The revellers are roaring drunk, and the children are following their example, drinking and smoking! Nobody pays attention to the examples of depravity on the wall - two paintings by Frans Hals: the figure of "Pickelhering" as drinker – which today hangs in Kassel – and "Malle Babbe" smoking. That picture is lost.

But there is another portrait of her in the Gemäldegalerie. An inscription on the back confirms her identity. Old documents show that there really was a Malle Babbe, or crazy Babette, living in 1653 in Haarlem – in the workhouse, which was also a prison and madhouse. 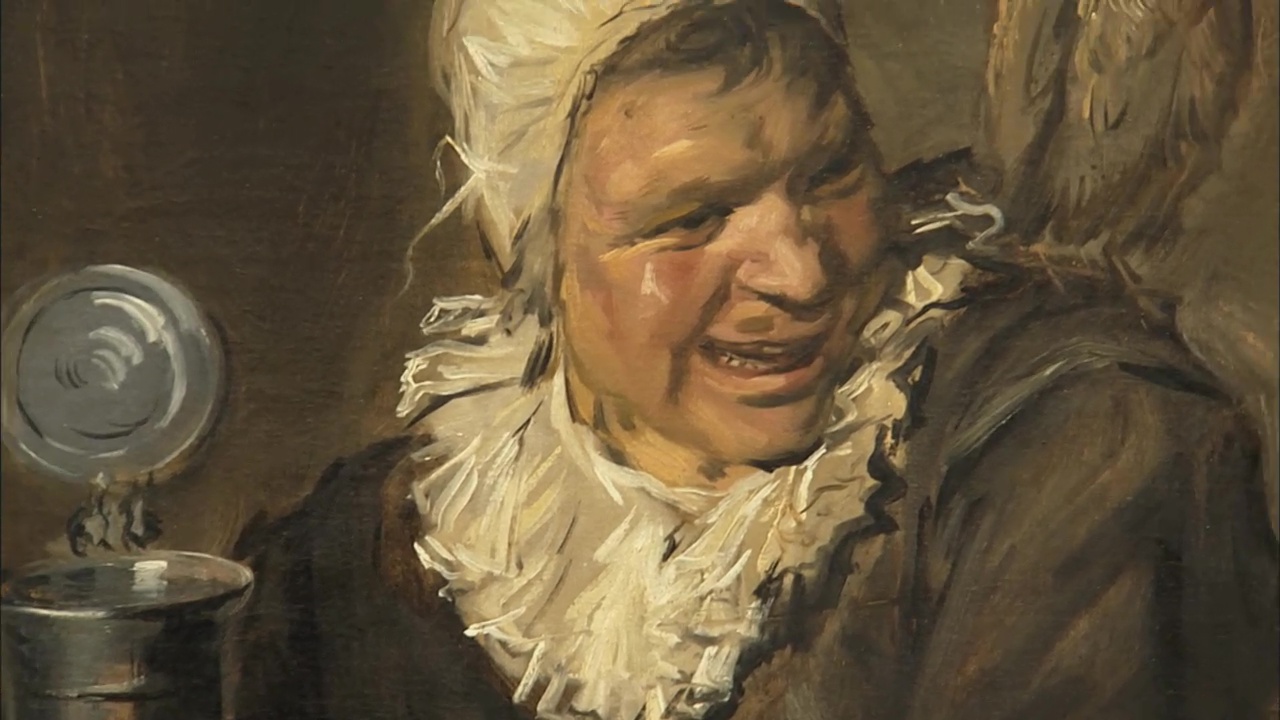 Frans Hals painted her about twenty years earlier. It is not just a portrait of a colourful character, but a warning about the dangers of alcohol. Babbe is clasping a huge beer mug... it is clear why she is laughing and her eyes are glazed. She is, as the Dutch saying goes, "as drunk as an owl". The owl is a nocturnal creature, an emblem for the dark side of life and often associated with witches. The real Babbe was called "the witch of Haarlem".

The impression of excess and abandon is enhanced by Frans Hals's manner of painting: the brushwork is loose and fast... a swift sketch or snapshot of what is going on at that very moment. And that is what makes this seventeenth-century painting look so very modern! Nineteenth-century artists were captivated. Gustave Courbet, for one, painted a copy in 1869. Courbet saw the painting in Aachen, in the collection of the steel magnate Barthold Suermondt. It was such a fabulous collection that the Prussian parliament made one million gold marks available in 1874 to buy it. That was a huge sum of money. The Pinakothek in Munich, by contrast, had a budget for acquisitions that year of just ten thousand marks. But the Suermondt collection was worth the price: It included many important works by early German painters, and also by Rubens, van Dyck – and Jan Vermeer, today considered the greatest of the genre painters.

Vermeeer's Woman with a Pearl Necklace was part of the Suermondt collection. Today it is one of the most popular paintings at the Gemäldegalerie. Light falls through a leaded window on a young woman who is looking at her pearl necklace in the mirror. On the table there is a powder brush, a comb and a jewellery box – all symbols of vanity. And the woman has eyes only for her own image – a clear allusion for Vermeer's contemporaries to superbia – pride. Like a glance in the mirror, beauty lasts just a short time. Omnia vanitas – all is vanity!

Neutron autoradiography revealed that, at first, on the wall behind the woman there hung a map, an emblem of the world. And on the chair lay a lute – an emblem of transience. As swiftly as its sound dies away, so swiftly do all things die. But that was evidently too obvious a message for Vermeer, and he painted over both the map and the lute. That makes the work much more restrained and tranquil.

You might think tranquility and propriety would be right at home in this bourgeois interior – so different from the realm of mad Malle Babbe. Yet this painting is also about the dangers of alcohol. Babbe downs quarts of beer. The genteel lady drinks wine. The man beside her is ready to pour her some more. He does not have a glass. His expression does not look honorable. He evidently wants to make the young woman tipsy. Vermeer lets the viewer speculate as to what might happen next. 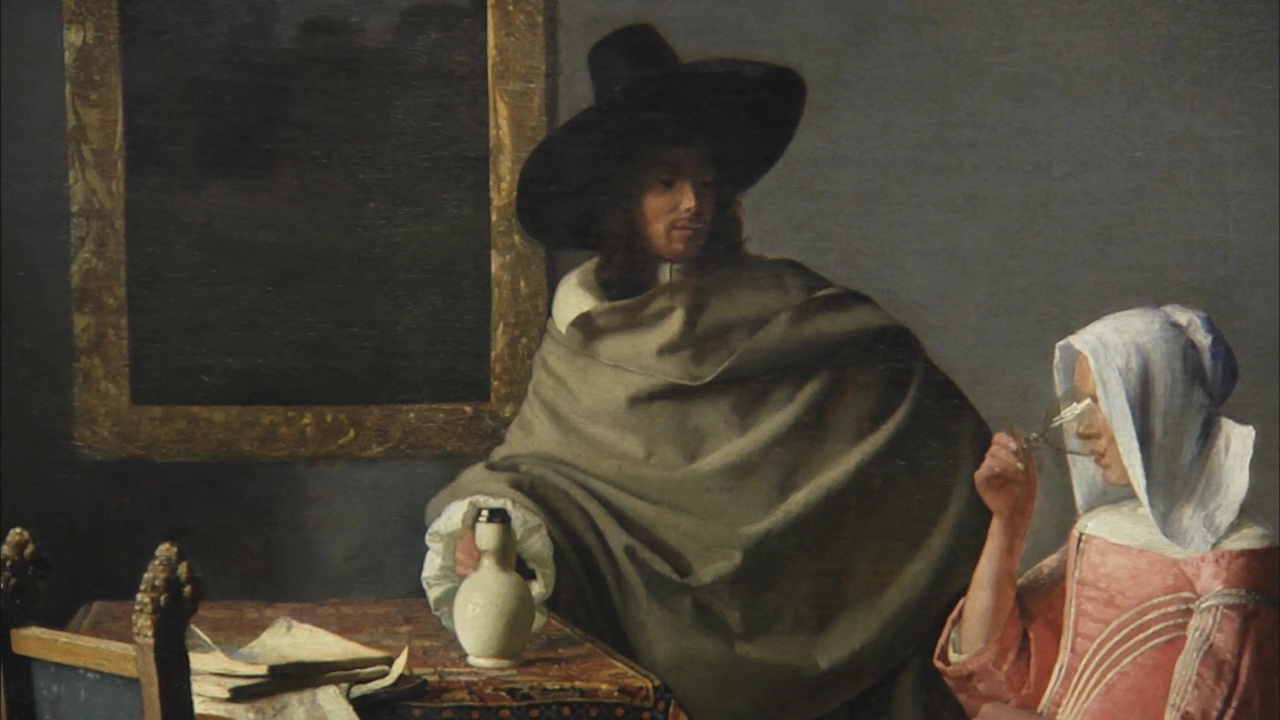 Still, the painting does include a clear allusion to virtue – were the lady to raise her eyes, she would see in the stained-glass window the figure of Temperance holding a bridle. The clear cool light entering through the window and the calm are very characteristic of Vermeer's work.

Though we know very little about his life. He was born in 1642 and died at the age of 43. He probably painted about sixty pictures in all. Only 35 have survived. Apart from painting, he was also an art dealer and ran a tavern. Perhaps the room with the window was his studio upstairs. Several objects show up in a number of his works. We know from an inventory of his property that he owned them: the jug, the heavy oak table, the leather chairs – and some items of clothing.

A landscape hangs on the wall – that was typical for the period. More than half the people in the Netherlands already lived in towns by that time. And this is how they brought the countryside into their parlors — both familiar scenes of home and the New World. The Dutch were the leading nation of sea-farers. Artists also visited remote places. In 1637 Frans Post accompanied Prince John Maurits of Orange-Nassau to Brazil, which was then a Dutch colony.

Allaert van Everdingen, by contrast, headed north – and visited Norway and Sweden. He was fascinated by the crags, mountain forests, and waterfalls – things he had never seen in the Netherlands. He made lots of sketches and, once he was back in Haarlem, painted dramatic pictures. They depicted exotic exciting realism, and his customers loved them. This was long before the age of mass tourism and holiday photos.

Everdingen's paintings also impressed Jacob van Ruisdael. He soon realised the potential of the market his colleague had discovered, and promptly started to paint lots of mountain scenes with waterfalls. Ruisdael had never seen any real mountains. Everdingen's paintings were his models. Ruisdael is one of the best landscape painters. Ironically, his paintings are often more convincing than Everdingen's "originals". Both however were very successful, and each sold a great number of works to enthusiastic purchasers.

The 17th century was the Golden Age of the Netherlands, where commerce flourished even as wars raged across Europe. The burghers became ever more prosperous. And one thing they did with their money was buy works of art. Paintings flooded the country. Art had become bourgeois.