The Colosseum - How Everything Began

On the Way into Modernity

The Colosseum - how everything began

Imperial Rome – an epoch of grandeur and expansion - and of bitter power struggles. In the year 68 AD the much-hated emperor Nero committed suicide, triggering a fight for accession. In the year following his death four different emperors ruled in succession– two were murdered, one killed himself and the last one prevailed.

Titus Flavius Vespasianus was born into a relatively undistinguished family. But he had become a successful military commander, involved in crushing the Jewish revolt in Judea. In Rome the power struggle was in full swing – and Vespasian seized the opportunity. He had the support of the majority of legions and in December 69 he was confirmed by the Senate as ‘princeps’ – the First Citizen of the state.

As Imperator Caesar Vespasianus Augustus he became a well-liked ruler and the head of a new dynasty. He was aware of popular expectations. Despite the power wielded by the Roman emperors, they were not only dependent on the support of their legions, but on the favor of the Senate and the people. The Republican façade had to be maintained. As a demonstrative gesture Vespasian planned a giant building in the garden of the palace that Nero had built in the center of Rome.

„The Colosseum was built on a spot that played a decisive role in the birth of the Flavian dynasty. This dynasty followed the Julian-Claudian dynasty after the end of Nero. Vespasian decided to give back to the city the area that Nero had seized after the fire in the year 64 in order to create a lake for his huge Domus Aurea. It was an area stretching from the Palatine Hill to the site known today as the Domus Aurea. To drain this lake and lay a foundation for the Colosseum, an enormous ring was excavated and filled with layers of cement to achieve a final height of around 14 meters.“

The funds to pay for this were provided by Vespasian’s son Titus. He had finished off the conquest of the Jews, destroyed the Temple in Jerusalem and brought the spoils to Rome. An incredible treasure – the seven-armed menorah was said to have been made of 30 kilograms of pure gold! The plundered gold from the Temple was badly needed for Vespasian’s ambitious construction plans.

The giant building site was only 200 meters away from the Forum. This was no coincidence: the temples and basilicas in the area were important sites of Roman public life. This was the economic, religious and political heart of the city. Next to it Vespasian set his triumphal monument, the Amphitheatrum Flavium. The term Colosseum did not gain wide acceptance until a thousand years later – but the Flavian amphitheater eclipsed everything that had come before.

It was the most modern piece of public architecture in the empire – and it was completed in less than eight years. Architect Barbara Nazzaro:

„We don’t know who designed this project, but it is clear that there was a master plan – a plan that was carried out by various different people. We see it as an extremely active and productive construction site. Four teams worked simultaneously on four sections that were divided into the four entrances on the main and minor axes. The ground plan of the Colosseum is in the shape of an ellipse. It’s clear that there was a coordinator or some figure who thought up this impressive architecture. Its structural elements were taken up by architecture in the following centuries. The classical orders of the columns later became an inspirational motif for the architecture of the Renaissance.“

The word ‘amphi-theater‘ actually means ‘both-sided theater’. The dimensions are gigantic: more than 52 meters high, 188 meters long and 156 wide, with an area of over three thousand square meters. More than 200 thousand tons of travertine limestone were used in the building, hewn by slaves from nearby quarries. 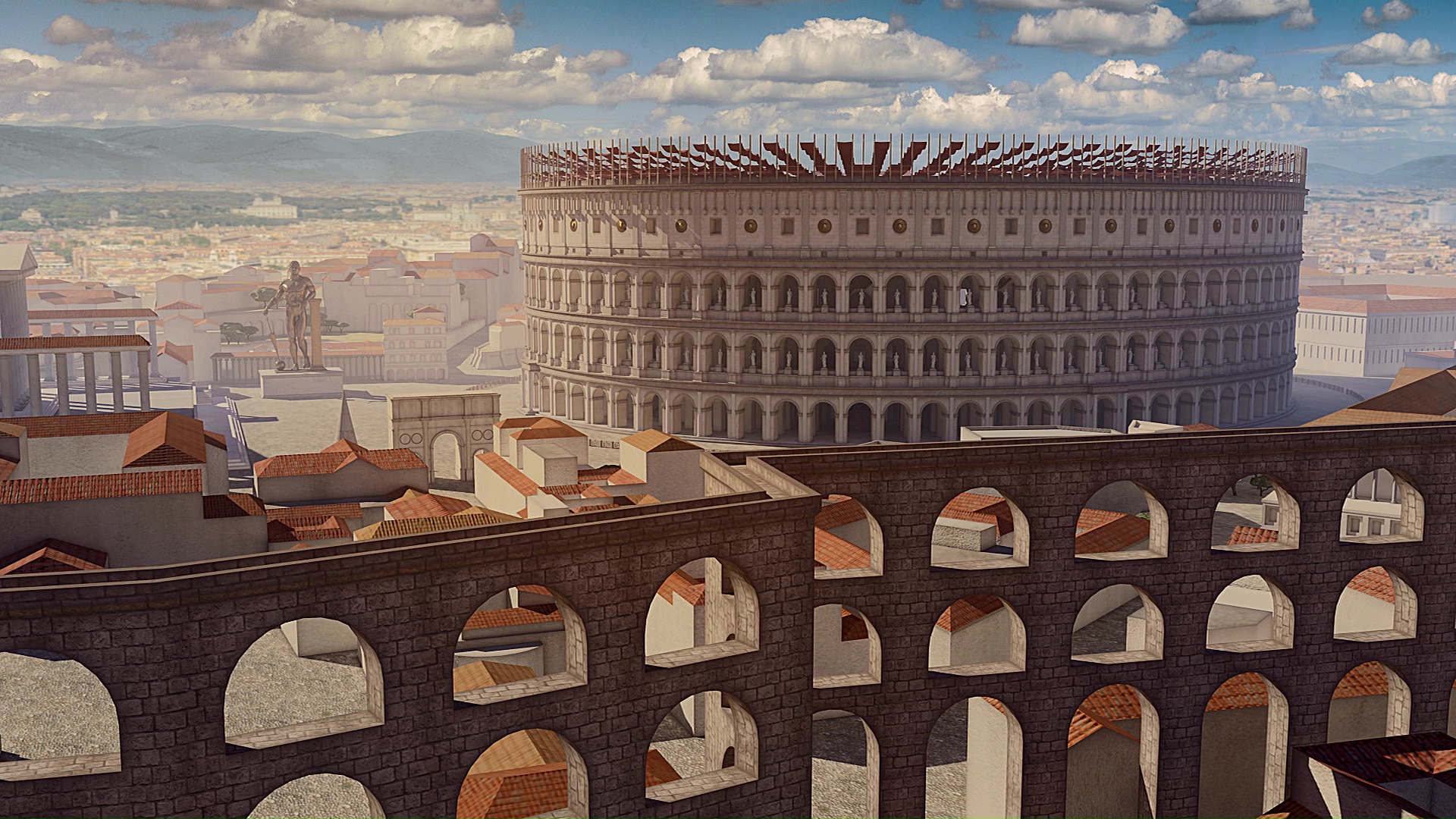 The exterior has monumental decorations on three stories. The three classical orders are in evidence: the Doric columns in the lower area; in the middle the Ionic and the Corinthian order on the upper storey. More than 160 bronze statues were set up. Inspired by Greek mythology they adorned the arches of the second and third levels. Forty panels commemorated Roman military conquests.

Barriers in front of the entrances channeled the flow of the crowd. The building seated more than 50 thousand spectators, distributed over four stories. Reportedly it took no more than eight minutes for everyone to take their designated seats. For that they received a kind of ticket indicating one of the 80 numbered entrances and the exact staircase.

The Senators and Vestals – the Roman priestesses – entered through the south entrance onto the podium. It was made entirely of marble and the access stairways were decorated with fanciful animal figures. The second and third tiers of the cavea, the largest part of the spectator space, were reserved for citizens and knights. Women could not enter here. Along with the slaves they were seated in the uppermost storey. On the side of the arena this area was decorated with 80 marble columns, but the tiers themselves were made of wood. Everyone, whether knight, citizen, woman or slave, knew exactly where their place was – in the amphitheater as in society. The building was a perfect mirror of the Roman class system.

A trick of the construction prevented all the tiers from emptying at the same time after the spectacle. The ordinary people still thronged the deliberately narrowed corridors of the upper storeys after the Senators had already exited the theater. Today, architects continue to build stadiums according to the same principle. The Flavian amphitheater is the mother of all stadiums.

And – like today – all eyes were on the VIP seats. The Emperor and his family entered the imperial box by way of a sumptuously decorated private entrance. For them the giant amphitheater had a chiefly political purpose.

That was nothing new. The Colosseum was the largest arena, but it was not the first. There were already amphitheaters throughout the Empire. Self-promoting citizens with the necessary money financed games for the populace. This enabled the sponsor, known as editor, to display his wealth and use the spectacle to further his interests – in a political campaign, for example. Members of the upper crust of Roman society strove to outdo each other – even if some went heavily into debt to put on such displays. The emperors had long recognized the power of the games. They enacted decrees on safety, set up authorities to organize the games – and used them to further their own aims.

The Empire was growing in size. Senators from the provinces were now permitted in the government. Even in the capital residents no longer knew their leaders personally. The games were a welcome occasion to present the new power elites to the Roman middle class public.

Rosella Rea, director of the Colosseum:

"The Imperators used the amphitheater to reach a broad consensus with all the strata of society, but mainly the middle class and the plebs. For that purpose the spectacles in the Colosseum could last for up to 120 days. 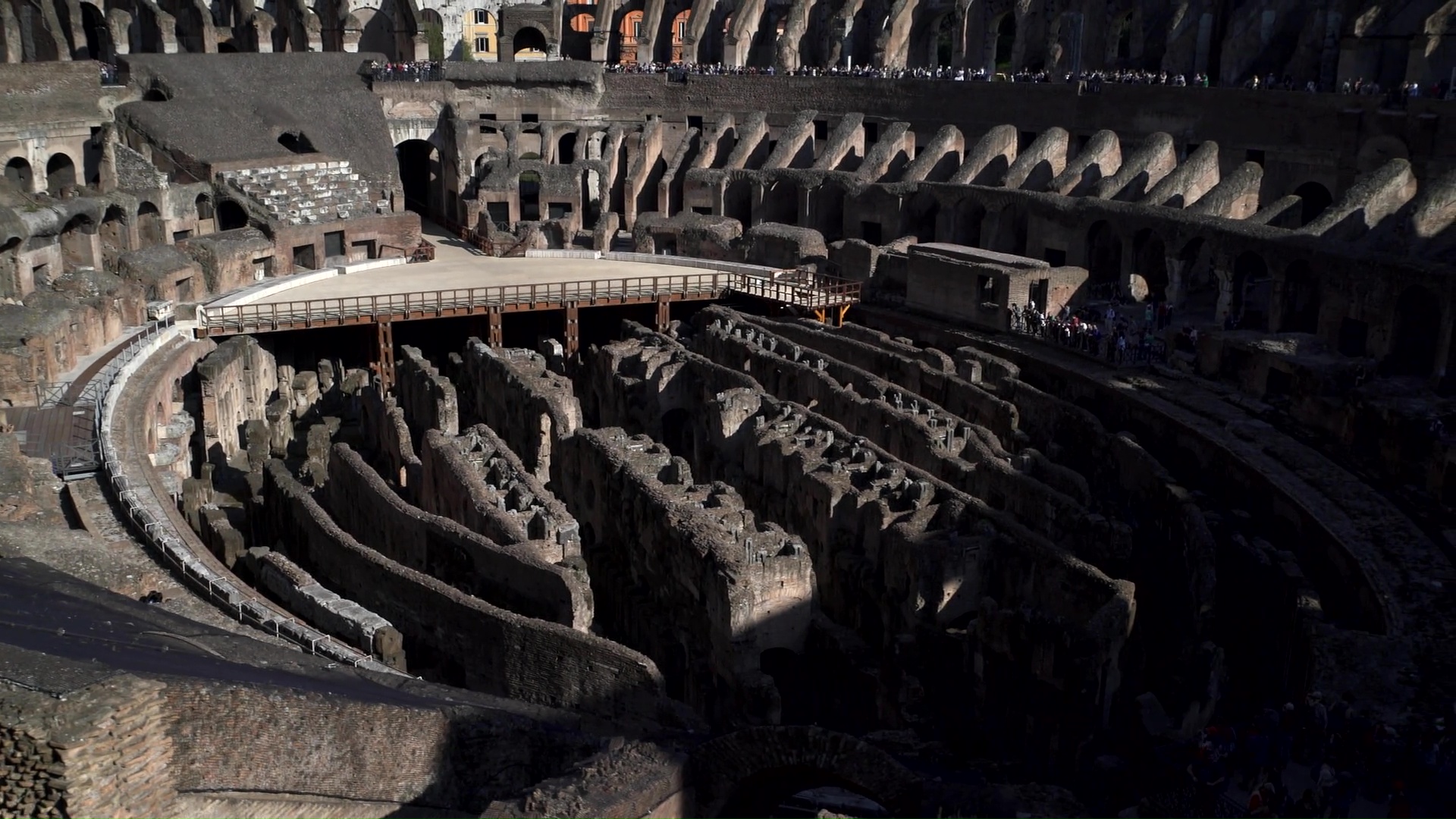 In shared bloodlust the emperor, the patricians and the populace joined to form a single mass. An important role was played by the awning called the velarium. The enormous canvas cloth was attached by ropes to 240 ships’ masts that were affixed to the façade. To construct this technical masterpiece, sailors were brought in especially from the Misenum military harbor.

The velafor provided refreshment – and even dropped nuts, dates, plums, pastries or rose petals. The winning tickets in a lottery provided the people with animals that had been slaughtered in the arena or free visits to brothels. This was more than just “bread and circuses“. At the center of these spectacles was the emperor, deciding, god-like, over life and death. And he exhibited that divine power not only to the Roman spectators gathered here, but to the entire world.rium not only protected the crowd from the sun, it also became the artificial sky of the arena’s own cosmos. It was saturated with scented water that dripped onto spectators

Contemporaries reported that not even the Wonders of the ancient World could surpass this arena:

"Let Memphis be silent about the wonder of the pyramids, Nor let Assyrian industry boast of Babylon, You soft Ionians, be not extolled for Trivia’s temple. All your labors must bowto the superiority of Caesar’s amphitheater.Instead of all, Fame will celebrate one work alone."

This is how the poet Martial eulogized the monument. Vespasian himself did not live to see his vision realized. He died one year before it was completed. In the summer of the year 80 it was his son and successor Titus who opened the amphitheater with inaugural games that would last 100 days. The opening featured a special kind of show: sea battles in the midst of the city.