Bread and Circuses at the Colosseum

The Gladiators - Win Or Die

On the Way into Modernity

The Gladiators – Win or Die

Martial was one of the spectators at the inaugural games. In a poem he commemorated the fearless fighters Priscus and Verus: As both Priscus and Verus fought onand for a long time the result was undecided,calls grew loud for the combatants to be released.But Caesar followed his own law: That law was for the bout to continue without shieldsuntil a finger be raised.

Gladiator duels were not new in Vespasian’s time. For centuries they had held a magical fascination – and are counted among the most dangerous martial arts of all times.

"There are two questions that have bothered researchers for a long time. What is the origin of gladiator combat and how did it come to an end? There is the Etruscan notion – which came from the Romans themselves – and which says the sinister things that they adopted could be ascribed to the Etruscans. And then there’s the Campanian-southern Italic theory that is more borne up by archaeological finds. There are many frescos in graves from the 4th century BC showing a kind of proto-gladiator fight. We see armed single combat in connection with a death cult, with death ceremonies, where blood also flows. Those aren’t yet real gladiators, but they seem to point in that direction – which of course doesn’t exclude the possibility that the Etruscans did have something like that, too."

The gladiators swore an oath to their manager, the lanista, that they were prepared to be burned, fettered, beaten and killed with the sword for him. This was not necessarily voluntary, but the prospect of fame and admiration attracted even free Romans.

"The gladiators’ identities certainly shifted over the course of the centuries. At the beginning they were probably mainly prisoners of war, who were also slaves and whose fate was in the hands of the Romans. They’d been spared in war, so they could be handled any way – such as being forced to fight to the death. At the time of the transition from the Republic to the Empire there were a growing number of toracli - those were people who signed a contract and fought voluntarily. In the first century AD that was often forbidden, because even aristocrats were volunteering. Any kind of public display in front of an audience, whether it was theatrical productions, chariot races, boxing or gladiator matches, was considered unworthy of a high-born Roman – it was seen as a kind of prostitution."

Once a man had become a gladiator he had to train, day-in, day-out. Special sports schools offered the top fighters professional training, a special diet and first-class medical care, all according to the latest scientific principles. This provided doctors with a welcome opportunity to perfect the art of wound care and healing. Even opiates were used during complicated surgical operations. Incidentally, these were skills that also benefited the front-line fighters of the Roman army. 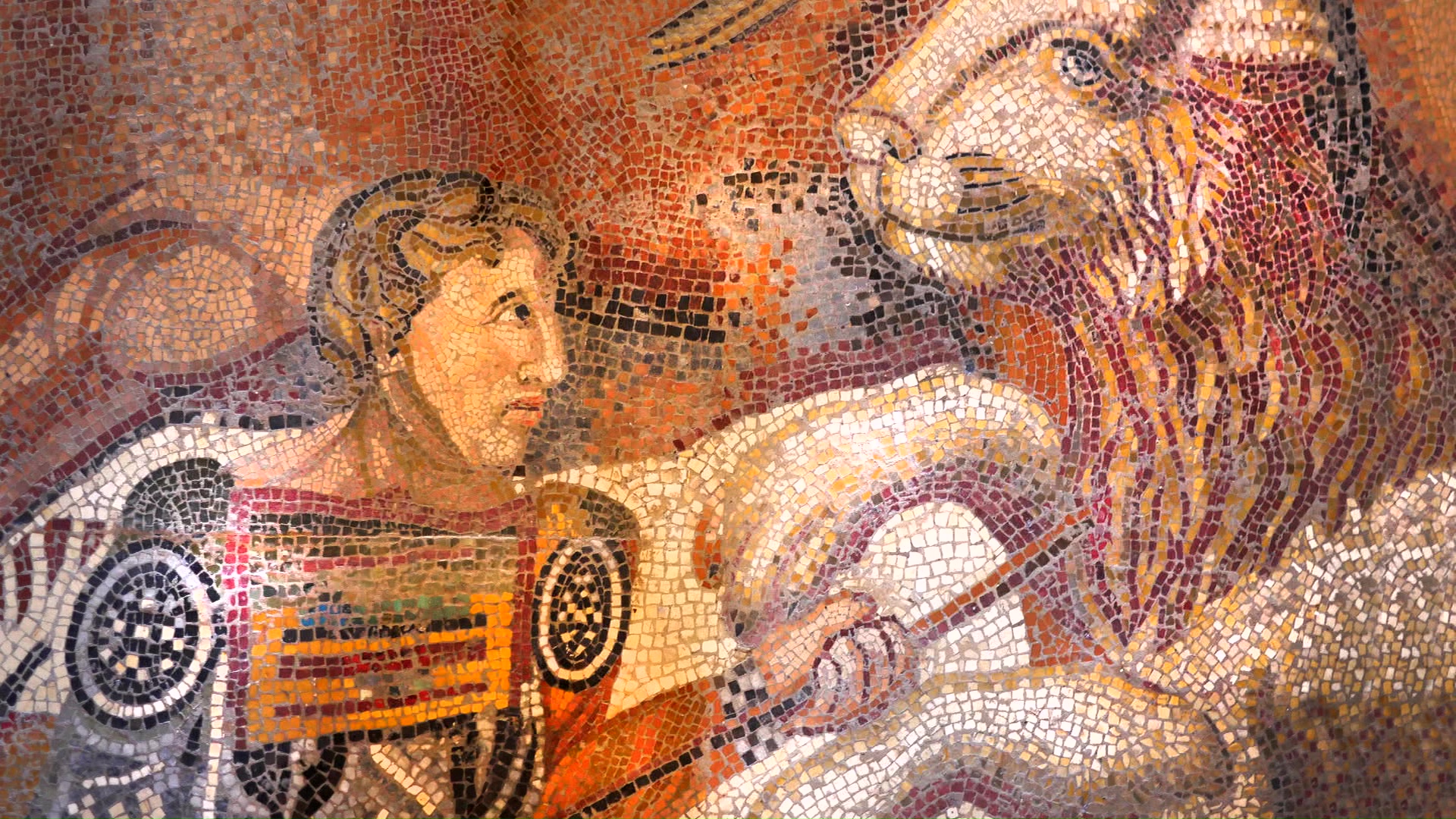 The gladiators were prisoners, but they led privileged lives. They lived in small cells, but they could earn more money in a day than a legionnaire earned in an entire year. They were the scum of society, yet they were worshipped and celebrated as heroes. Women – even from some of the best families – were drawn to the gladiators. These were the rock stars of the Roman world, and they were irresistible. But the sex they had came before, not after, their appearance in the arena. In the night before the bout, an editor would throw a big banquet for his fighters. Women had free admission. They knew their lovers might die the next day – and that provided a special erotic kick.

The next morning the moment had come. The first men prepared for their appearance. Some of them were still hung over from the excesses of the previous night. But the approaching one-on-one match made the adrenaline flow.

The gladiators fought in fixed combinations. A referee made sure the rules were strictly observed. One of the attractions was in the apparent inequality of the pairs of fighters. But in fact weapons and body protection were carefully matched.

"A proper professional gladiator match was supposed to be a free fight in which both could prove their ability. That would have been spoiled if one of them had an unfair advantage. Gladiator matches were always a celebration of military values – this wasn’t only slaughter designed to satisfy voyeurism and sadism, although those played a role. (But) in contrast to the theater, which was considered to be licentious and corrupt, gladiator games were considered highly commendable. Audiences could learn something from them – such as a stoic contempt for death…Or as Pliny the Younger said about Emperor Trajan: You gave the people, not dissolute theater productions, but manly gladiator combats where one learns to scorn death, and to glory in lovely wounds."

The amphitheater had two seating sections for fans: The scutarii were supporters of the gladiators with the large, rectangular shield, called the scutum. Their favorites were called provocator, murmillo or secutor. Other gladiators such as the thraex carried a small shield, the parmula. Their fans called themselves parmularii.

A provocator was only paired against his own kind. He fought with a bared upper body. His broad-brimmed helmet resembled that of a legionnaire. A visor protected his face so that he could attack without hiding his head behind the shield. As an additional protection he had a breastplate, leather gaiters and greaves for the legs. The manica – an arm protector – was made out of cloth and leather and fastened with bands. He attacked using the feared short stabbing sword used by legionaries that gave the gladiators their name, the gladius.

These two female gladiators, or gladiatrices, named Amazon and Achillia are provocatores. The relief is one of the few testimonies to female fighters. Sources from antiquity do mention them, but they were probably the exception, as bravery and contempt for death were considered masculine attributes. 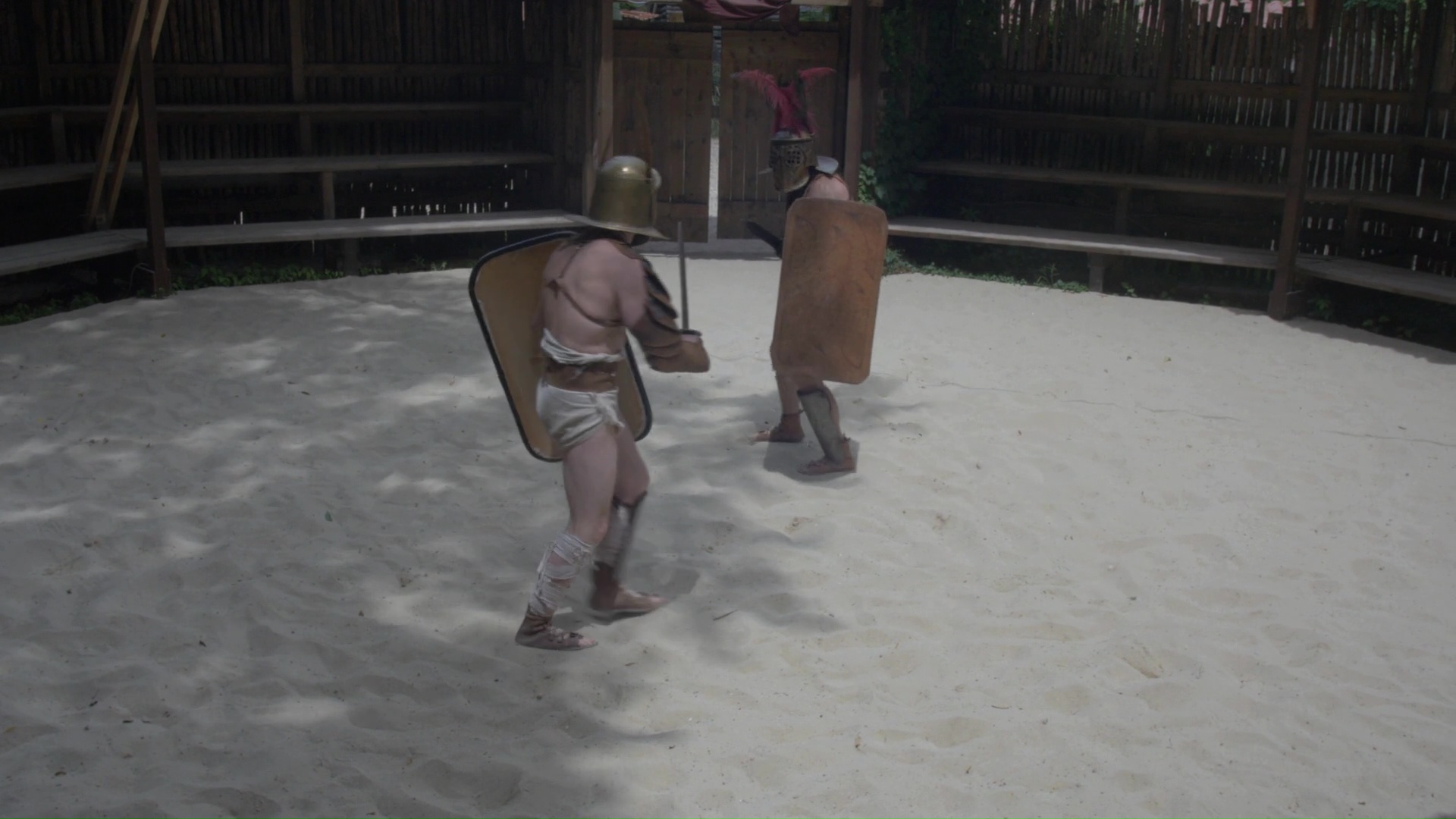 The murmillo wore a helmet with a high, bent crest. It provided protection along with the shield and gaiter. The murmillo also had a manica as an arm protector, and he also had to stab with the gladius at the right moment. The murmillo was the perfect counterpart to the thraex or the hoplomachus. Later the murmillo gladiator type was also paired with the retarius, the net fighter.

The thraex. The name indicates an origin in Thrace, today’s Bulgaria; and therefore the typical Thracian curved sword which was ideal for attacks that could wound the opponent behind his shield. The thraex was paired with the murmillo.

The secutor, or pursuer, was a variant of the murmillo, but his undecorated helmet covered his face except for small eye-holes. The smooth helmet could not easily be caught in the retarius’s net.

The net fighter was the crowd favorite. With his net and trident the retarius was reminiscent of Neptune, the god of the sea. The only protection he had was a shoulder guard. But even without helmet and shield he was only apparently at a disadvantage. His strength lay in his cunning and agility. The fearsome trident kept his opponent at bay, tiring him out until the retarius could ensnare him in the net or make him fall.

When a gladiator could no longer fight, he raised his hand with an extended finger and lay down his weapons. A famous 19th century painting, ‘Pollice verso’, shows such a moment. The work has influenced the popular view of the gladiator games like no other. Although the depicted scene is not historically proven, the artist Jean-Léon Gérôme makes the arena come alive.

Flushed with victory, the gladiator sets his foot on his defeated opponent. He will use his sword to give him the finishing stroke. The man on the ground is making a desperate attempt to escape his fate. He begs to be spared – to be granted missio – or release. But the vestals, like furies, stoke the mood in the arena: thumbs down, pollice verso. The emperor hesitates – but the crowd wants to see blood.

The decisive gesture may not have been the turned-down thumb – it is possible that it originally was moved across the throat in a “cut-throat” gesture. But in any case, if the emperor ordered it, the gladiator had to die. That was the climax of his appearance; the real showdown. A gladiator had to know how to die. Now, kneeling before the gods and the emperor he could prove it. During all the years of hard training this was the moment he had always had before him. Without fear, but with grace and humility, he received the sword stroke. Even sceptics were not immune to such scenes. A pupil of the philosopher Augustine described in a letter the craving that seized him:

"We sat down on in an empty seat – the place was heaving with inhuman lust. I closed my eyes. If only I could have stopped my ears, too, for when one fell in action and the entire crowd raised a mighty cry I succumbed to curiosity. I opened my eyes. And my spirit received a deep wound for as I saw the blood, I was seized by a thirst for blood and delighted in the sinful fights and was intoxicated. Thereafter I was no longer the same man who had come, I watched and screamed along. I felt the insane craving to return again and again."

The dead gladiators were carried through the porta libitinaria – named after Venus Libitina, a Roman goddess of death. In the spolarium their equipment was removed. Their fellow combatants cut their throats a second time. Alternatively a glowing iron was used as a test, or a blow to the head was given with a bronze hammer. In case the fighter had been feigning death, now he was really dead. This was to prevent any charges of collusion – for the Romans loved to place bets on the survival of the gladiators. 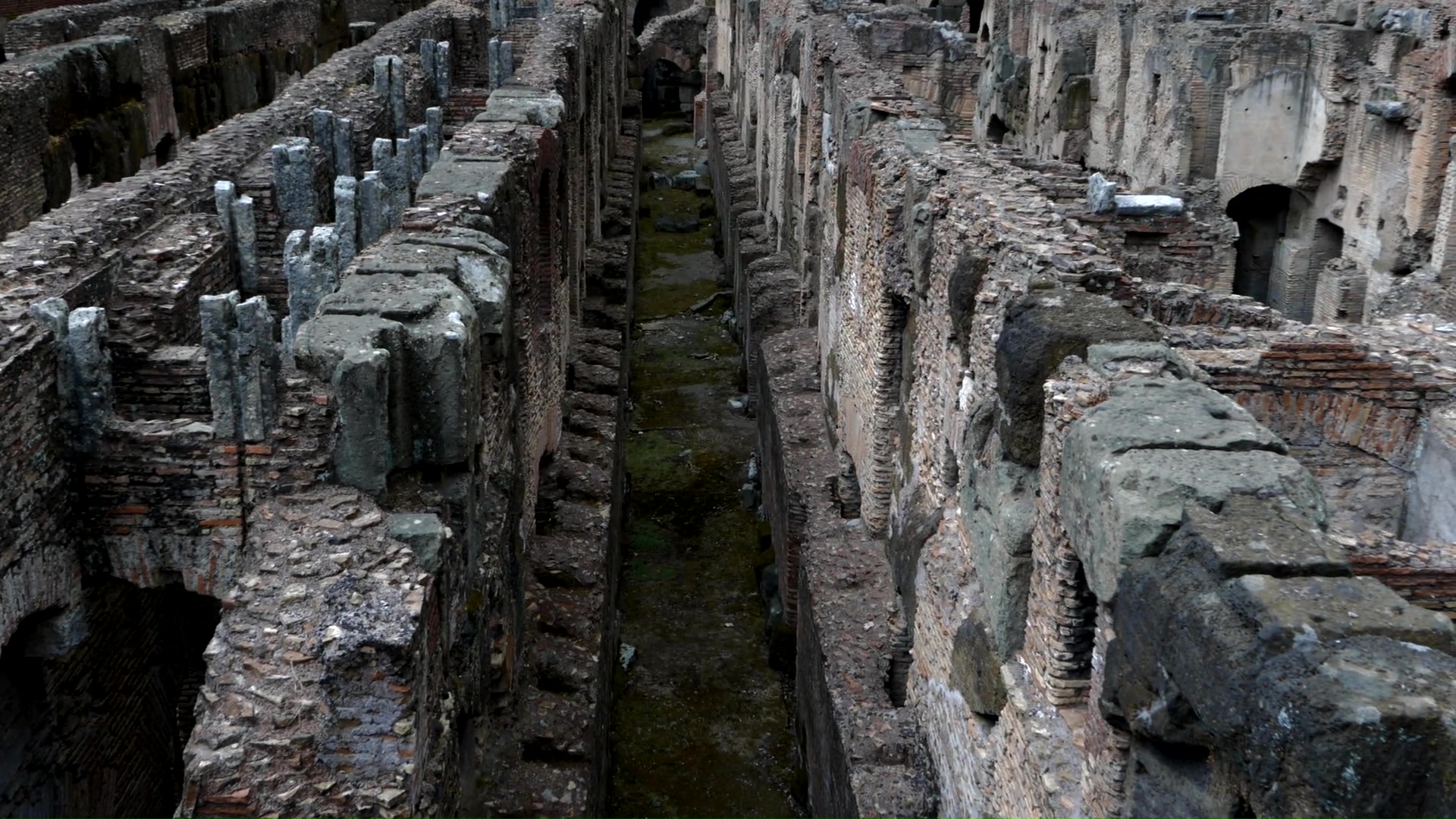 Priscus and Verus were fortunate, by the way. Both fought to the utmost – and both were declared victors in an undecided match. Martial’s poem ends with Emperor Titus sending the palm of victory and a wooden sword, the rudis, to both fighters and granting them freedom. In fact, only one in ten gladiators died at the games. They were lucrative investments for the managers and, like soccer players, they could be sold to other teams.

A gladiator who regained his freedom could work as a trainer in gladiator schools or as a bodyguard. Upper-class Romans enjoyed having these hardened men in their service.

"We know from many gravestones that they led relatively normal lives, that they had wives and children who gave them gravestones with emotional inscriptions. The depictions on the graves, where they are displayed with victory palms, with their equipment, in the posture of winners or fighters, show that they were self-assured and proud of their profession. So we shouldn’t just see them as underdogs."

The will to win, contempt for death and bravery were the cardinal virtues of Roman society. The gladiator was the epitome of these virtues. And he became the symbol of an entire epoch.